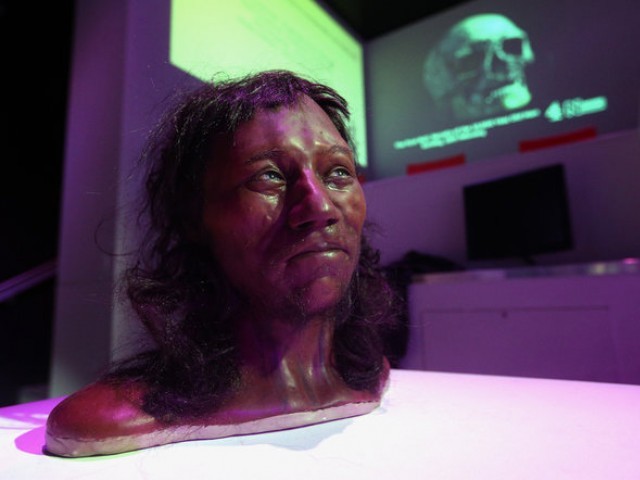 LONDON: “Cheddar Man”, Britain’s oldest, nearly complete human skeleton, had dark skin, blue eyes and dark curly hair when he lived in what is now southwest England 10,000 years ago, scientists who read his DNA have discovered.

The finding suggests that the lighter skin pigmentation now seen as typical of northern Europeans is far more recent than previously thought, according to researchers from University College London (UCL) who took part in the project.

Cheddar Man’s skin color was described as “dark to black” by the scientific team which also included researchers from London’s Natural History Museum, where the skeleton is on display in the Human Evolution gallery.

“To go beyond what the bones tell us and get a scientifically based picture of what he actually looked like is a remarkable, and from the results quite surprising achievement,” said Chris Stringer, the museum’s research leader in Human Origins.

Unearthed in 1903 in a cave at Cheddar Gorge, in the county of Somerset, the Mesolithic-era man was a hunter-gatherer whose ancestors migrated into Europe at the end of the last Ice Age.

Three hundred generations later, around 10 per cent of indigenous British ancestry can be linked to Cheddar Man’s people, scientists say.

As part of a project commissioned by Britain’s Channel 4 television station for a documentary, experts from the Natural History Museum’s ancient DNA lab drilled a tiny hole into the skull in order to extract genetic information.

The DNA was unusually well-preserved, enabling the scientists to sequence Cheddar Man’s genome for the first time and to analyse it to establish aspects of his appearance.

Then, a pair of Dutch artists who are experts in palaeontology model making, Alfons and Adrie Kennis, used a high-tech scanner to make a three-dimensional model of Cheddar Man’s head.

The model will be shown on UK’s Channel 4 documentary, which is scheduled to be aired on Feb. 18.

Selina Brace, one of the Natural History Museum’s ancient DNA experts who took part in sequencing Cheddar Man’s genome, was quoted as saying the model was “really, really cool”.

Baghdad mayor has ambitious plans for her city