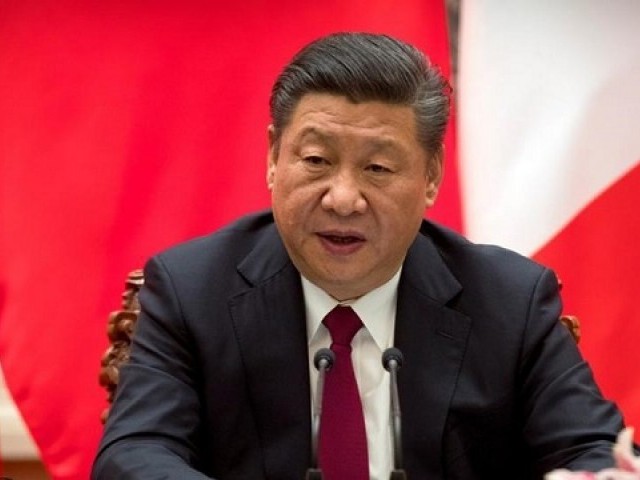 Chinese President Xi Jinping at a press meet at the Great Hall of the People in Beijing. Xi congratulates Sri Lanka on its 70th anniversary of Independence from British rule. PHOTO: REUTERS

Chinese President Xi Jinping has said that China is willing to work with Sri Lanka for better development of bilateral “strategic cooperative partnership”, in a statement which underlines deepening ties between Beijing and Colombo.

In a message addressed to Sri Lankan President Maithripala Sirisena on the occasion of the island nation’s 70th anniversary of independence on Sunday, Xi said he pays “high attention” to the development of bilateral ties.

“I pay high attention to the development of China-Sri Lanka relations, and I am willing to make concerted efforts with President Sirisena to push the China-Sri Lanka strategic cooperative partnership of sincere mutual assistance and long-standing friendship to keep achieving greater development in the better interest of the two countries and the two peoples,” Xi was quoted as saying by the official news agency in China.

Recalling the “traditional friendship and mutual assistance between China and Sri Lanka,” Xi said the two countries “have conducted pragmatic cooperation within the framework of joint construction of the Silk Road Economic Belt and the 21st Century Maritime Silk Road, achieving fruitful results.”

Proposed by China in 2013, the Belt and Road Initiative (BRI) aims to build trade and infrastructure networks connecting Asia with Europe and Africa based on ancient land and maritime trade routes.

India is expected to follow Xi’s statement very closely, and has so far not joined the BRI. Besides complaining about problems with lack of transparency – the Hindu-majority country has sovereignty concerns, as the initiative’s flagship project, the China-Pakistan Economic Corridor, passes through the disputed Kashmir territory.

But New Delhi will also be concerned as its neighbours, including Sri Lanka and Pakistan, join the BRI and welcome Chinese projects on their territories.

China has emerged as the largest foreign direct investment contributor to Sri Lanka in 2017, followed by India and Singapore.

Beijing has already invested billions in Sri Lanka and is building ports, power stations, roads and highways, railways and even office space.

The Hambantota Port is the second port project between Sri Lanka and China, the Xinhua report said.

“The Colombo International Container Terminal (CICT), which has proven to be one of the fastest growing terminals in the world, has recorded 2.35 million TEU containers since it came into service in 2014,” it said.

China has invested over $8 billion in Sri Lanka over the years for various projects, including Hambantota port which it acquired on 99 years lease as a debt swap. It is also building the Colombo port city project, where Sri Lanka plans to establish an international financial city.

China is in the process of firming up its presence in the Indian Ocean with a string of ports which included Hambantota and Djibouti in the Horn of Africa.