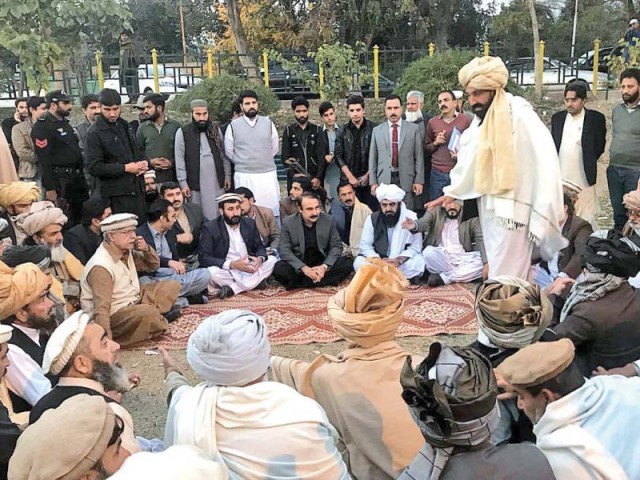 ISLAMABAD: Thousands of tribesmen from the Federally Administered Tribal Areas (FATA) and parts of Khyber Pakhtunkhwa on Saturday continued their protest over the alleged extra-judicial killing of Naqeebullah Mehsud in Karachi last month.

The protesters who arrived in the capital on February 1 have been staging a sit-in outside the National Press Club in F-6.

The Polyclinic underpass has been shut since Thursday as protesters have kept the main road and a greenbelt occupied.

Protesters, who mainly comprise Mehsud tribesmen from South and North Waziristan, demand arrest of fugitive SSP Malir Rao Anwar and other members of his team who were allegedly involved in extra-judicial killings. Protesters have also demanded that the authorities address other issues facing tribesmen.

Capital Administration and Development Division Minister Dr Tariq Fazal Chaudhry visited the protest camp on Saturday evening to represent the government. He said the government shared the grief of Naqeebullah Mehsud’s family, relatives and tribesmen. He said the federal government was making utmost efforts for arrest of Rao Anwar.

“It was the federal government that stopped the murderer Rao Anwar from fleeing abroad … Law enforcement agencies are meant to protect the people. It is unacceptable if they start killing people instead of protecting them,” Chaudhry said.

On government behalf, he also assured the protesters of addressing their law and order in South and North Waziristan agencies. The minister also appreciated the protesters for keeping their demonstration peaceful and not creating hindrances to commuters.  Fiery speeches from the stage set up on a container were interspersed with full throated slogans of justice for Naqeeb and punishment for Rao Anwar.

Due to the protest sit, the underpass from Super Market to Polyclinic is closed for all traffic. Nazimuddin Road at China Chowk is also closed apart from a few streets around sit-in.