Outlaw­ed TTP claims respon­sibili­ty for the attack that also left 13 injure­d near an army camp in Kabal tehsil­
By Our Correspondent
Published: February 3, 2018
Tweet Email 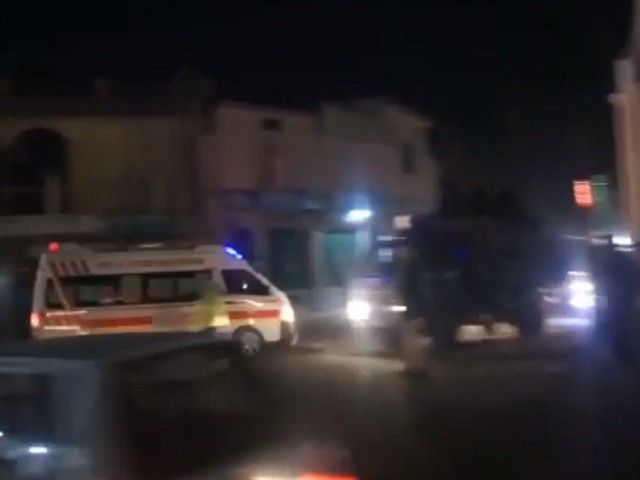 Security forces and police have cordoned off the area in Swat's Kabal tehsil. SCREENGRAB

PESHAWAR: Eleven soldiers, including a captain of the Pakistan Army, were martyred on Saturday when a terrorist blew himself up during a volleyball match in Swat valley of Khyber Pakhtunkhwa (K-P).

At least 13 people also sustained injuries in the attack that is the deadliest since 2013.

The blast took place in the evening near the Pakistan Army’s sports unit situated at Sharifabad area of Swat’s Kabal tehsil.

“The military men were playing volleyball in the evening when a suicide bomber exploded his suicide vest,” a security official told The Express Tribune.

According to an eyewitness, he heard a huge explosion from within the military camp. “Later the security forces cordoned off the area and imposed a limited curfew in the locality. There was a plume of smoke rising from the camp,” he said.

A statement, issued by the military’s media wing, at first said three security personnel were martyred in the attack. “Three security officials embraced Shahadat, while 7 [others were] injured [in the blast],” said the Inter Services Public Relations (ISPR).

However, the seven critically-injured personnel also succumbed to their wounds, raising the death toll to 11.

15 martyred, 25 injured in bomb attack on army truck in Quetta

Quoting a security official, Reuters said the match was also being watched by civilians, and the casualty count could rise as a large number of people had gathered in the area.

The injured security officials were taken to the Saidu Teaching Hospital in Mingora.

An official said the martyred soldiers included a Captain. After the attack, the security forces and police cordoned off the area and mounted a manhunt for the accomplices and handlers of the bomber.

The outlawed Tehreek-e-Taliban Pakistan (TTP) claimed responsibility for the attack in an email sent to the media as it warned more such attacks. “This was the second attack in a month,” said the statement which identified the bomber as Sadeeq.

The bombing was one of the deadliest since 2013. Swat, which was briefly taken over by Taliban militants led by Mullah Fazlullah in 2009, was recaptured by security forces after a three-month-long military campaign. Mullah Fazlullah, then head of the TTP Swat, later fled to Afghanistan.

The K-P police on January 27 sent an advisory after a major attack in Kabul. The advisory, issued by the K-P inspector general of police, was for deployment at security installations and cautioned vigilance.

Strongly condemning the terrorist act, Prime Minister Shahid Khaqan Abbasi expressed deep grief over the loss of lives and offered condolences to the bereaved families. The premier prayed for the departed souls and quick recovery of the injured.

“The coward terrorist enemy is no match for our valiant sons of the soil,” said the premier, adding that no cowardly attack could deter the nation from taking its struggle against the menace of terrorism to its logical conclusion. “We will continue our fight till the last trace is rooted out,” he vowed.