Under-pressure Zidane to test his gamble on Levante trip

Under-pressure Zidane to test his gamble on Levante trip 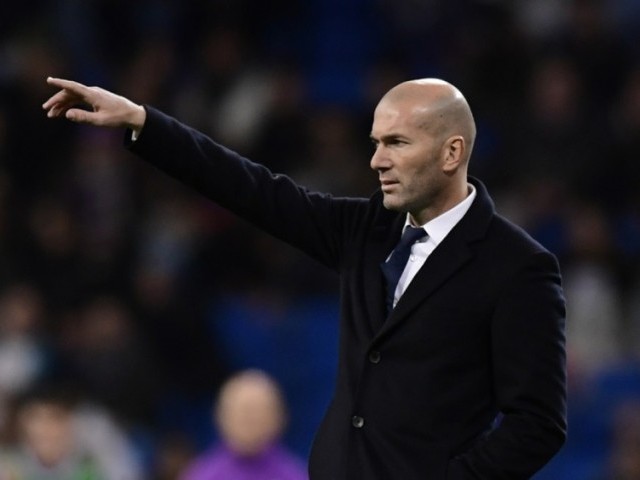 Continuing Momentum: Real Madrid have been knocked out of the Copa del Rey and are 19 points behind league leaders Barcelona, but manager Zinedine Zidane will be hoping that his team will continue their run of two victories, where they scored 11 goals in total. PHOTO: AFP

MADRID: Real Madrid manager Zinedine Zidane has taken a big gamble by refusing to add to his squad in the January transfer window.

The Los Blancos will travel to Levante this weekend, where they will find it if Zidane’s decision was right.

There were no new arrivals at the Santiago Bernabeu, with a move for the Athletic Bilbao goalkeeper Kepa Arrizabalaga the most notable transfer that didn’t happen in La Liga.

Kepa signed a new long-term contract in Bilbao after Zidane insisted that he did “not need a goalkeeper”. Instead he will stick with Keylor Navas, who faces his former club on Saturday.

Madrid appeared to be in a full-blown crisis after they were dumped out of the Copa del Rey by Leganes, but they have won their last two games in La Liga, scoring 11 goals in the process.

A 7-1 defeat of Deportivo was followed by a 4-1 win at Valencia last weekend, when Cristiano Ronaldo scored two penalties as Real moved to within two points of third-placed Valencia with a game in hand.

“A crisis for Madrid is losing one game but nobody doubts their quality. All the small teams want to go through the crises that they have,” said the Levante coach Juan Ramon Lopez Muniz, whose team drew 1-1 at the Bernabeu in September.

Pressure on Zidane in Valencia clash

Ronaldo, who has scored four goals in two league games, has been struggling with a calf knock. However, he is expected to play as Madrid begin a month that will be shaped by their Champions League last 16, first leg against Paris Saint-Germain on February 14.

Barcelona, who are 11 points clear of Atletico Madrid at the top, put their unbeaten league record on the line as they visit Espanyol on Sunday.

It will be the third Catalan derby in under three weeks, after Barca won 2-1 on aggregate in the Copa del Rey quarter-finals.

However, Sunday’s game falls awkwardly for Barcelona, in between the two legs of their Cup semi-final against Valencia. Atletico host Valencia on Sunday night.

Among the busier clubs in the January window were Sevilla, future Champions League opponents of Manchester United.

They have brought two players back to Spain on loan from England —midfielder Roque Mesa from Swansea City and Everton striker Sandro Ramirez.

“Sevilla have been interested in me for a year and a half,” said Ramirez. “They knew how much I wanted to be here,” said Mesa, who endured a difficult last six months at Swansea. In the end our paths were destined to come together. This is a big club.”

The 26-year-old Spain international says he is “proud” to become the most expensive signing in Athletic Bilbao’s history, after they paid his €32 million buyout clause to sign the centre-back from Basque rivals Real Sociedad.

Athletic swooped for Martinez after seeing Aymeric Laporte move to Manchester City for a reported £57 million, and he could make his debut for his new club in Girona on Sunday.

Meanwhile, Real Sociedad president Jokin Aperribay has hit out at the player, suggesting he should have waited for an offer from “a team that can win the Champions League, or at least get to the semi-finals.” And fans in San Sebastian will be allowed to exchange Real shirts with Martinez’s name on it for another one.