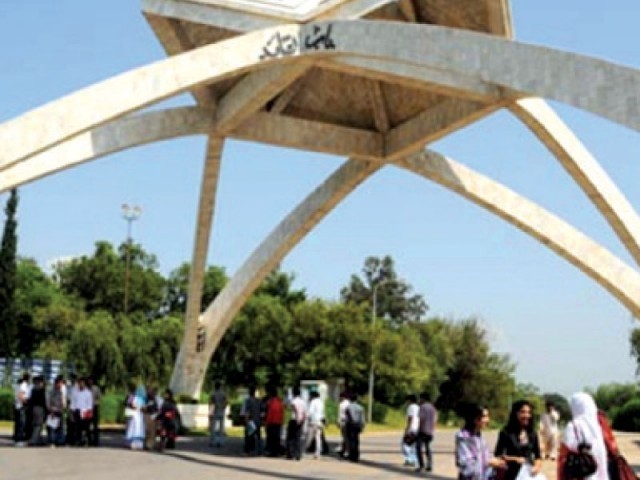 To counter encroachment and attempts to grab land, some lawmakers on Wednesday directed the civic authorities in the capital to demarcate exact boundaries of the Quaid-i-Azam University. PHOTO: FILE

ISLAMABAD: To counter encroachment and attempts to grab land, some lawmakers on Wednesday directed the civic authorities in the capital to demarcate exact boundaries of the Quaid-i-Azam University.

The National Assembly Standing Committee on Education, which met with the Member National Assembly (MNA) Amirullah Marwat on Wednesday, further directed the Islamabad Capital Territory (ICT) Administration and the Capital Development Authority (CDA) to present a report on the demarcation to the committee within 45 days so that action against encroachers can be taken.

Earlier, an official of the Quaid-i-Azam University (QAU) had briefed the committee about the current situation of encroachment on varsity’s land and the efforts being made to free it.

At this, the ICT deputy commissioner and CDA’s Member Planning briefed the committee about the role they were playing in tackling the encroachers. Moreover, they said that a process to demarcate land of the varsity had been pending for decades.

CDA’s newly installed Chairman Usman Bajwa assured the standing committee that the demarcation process would be completed as soon as possible and its report would be presented to the NA body on a weekly basis.

Federal Minister for Education Balighur Rahman highlighted that there were three major issues with the encroachment. The first was that while the Survey of Pakistan had listed that the varsity owned 152 acres of land, it had actually been allocated far less land when the university was set up over 50 years ago.

Second, the minister said that on the land allocated to the QAU, there were a few villages. Given how people had lived in these villages for generations, they were unwilling to vacate their ancestral land.

The final issue, Rahman said, was the university’s inability and negligence to protect its boundaries from encroachment.

“It was the responsibility of the university to take action against encroachers with support from the ICT,” he said.

To a question, Higher Education Commission (HEC) Chairman Dr Mukhtar Ahmad said that they had witnessed a rapid increase in the number of students in women-only universities since parents of many girls did not wish for their children to study in a co-education institution.

Earlier, the committee passed “The Institute for Art and Culture Bill 2018” with consideration from the entire body. The bill would see an institute on art and culture set up in the federal capital.

The committee directed that once a campus is set up in Islamabad, further campuses would be established in the provinces since culture, heritage and arts are the need of all provinces. The panel of lawmakers also recommended that the institute must be turned into a degree-awarding institution.

Marwat took strict notice of the alleged fake degree of the Federal Urdu University vice chancellor. The education minister said that his ministry did not support any step which was taken against the law.