No talks with US until Jerusalem move reversed: Palestinian official

No talks with US until Jerusalem move reversed: Palestinian official

says the decisi­on was "part of a new Americ­an era of moving from negoti­ation to dictat­ion"
By AFP
Published: January 30, 2018
Tweet Email 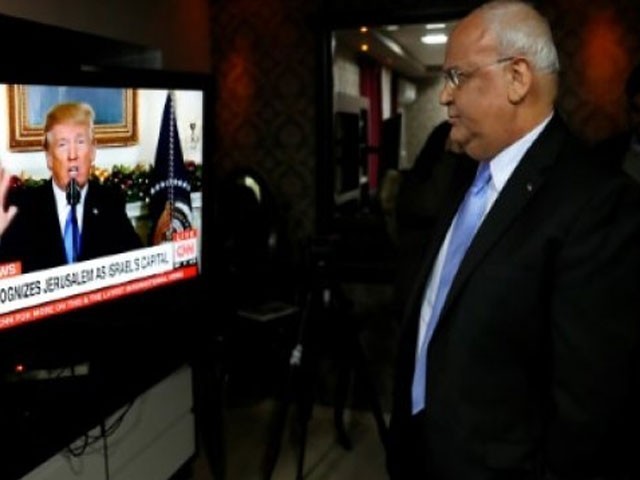 Chief Palestinian negotiator Saeb Erekat watches US President Donald Trump give a speech, during which he recognised Jerusalem as Israel's capital. PHOTO: AFP/FILE

RAMALLAH, PALESTINIAN TERRITORIES: The Palestinians’ top negotiator said Tuesday there could be no discussions with US President Donald Trump’s administration until his recognition of Jerusalem as Israel’s capital is reversed.

Saeb Erekat, secretary-general of the Palestine Liberation Organisation and the Palestinians’ longtime chief negotiator, told AFP in an interview the decision was “part of a new American era of moving from negotiation to dictation”.

Trump’s December 6 recognition of Jerusalem as Israel’s capital set off protests among Palestinians, who consider the city to be their capital as well.

Erekat’s comments come with rhetoric further sharpening between Trump’s White House and the Palestinians, who have said the United States can no longer mediate in the Middle East conflict and boycotted a recent visit by US Vice President Mike Pence.

Last week, Trump accused the Palestinians of disrespecting the United States and threatened to withhold hundreds of millions of dollars in aid until they returned to the negotiating table.

Provoking Palestinian outrage, he reaffirmed his Jerusalem decision and said the disputed city had been taken “off the table”, despite having previously said his recognition did not preclude later negotiations on its borders.

Trump made the comments in Davos, Switzerland, while seated next to Israeli Prime Minister Benjamin Netanyahu.

According to Erekat, the Palestinians — faced with what they see as a blatantly biased US administration — are aiming to convene an international conference in an effort to show global support for a two-state solution to the conflict.

Asked whether there can be any contact with the Trump administration if the Jerusalem decision is not reversed, Erekat said: “How can you?”

“You heard what President Trump said in Davos. He said: ‘We took Jerusalem off the table’.”

“The minute any Palestinian goes and meets with American officials, it is an acceptance of their decision. Now they are threatening us with money, with aid,” he said.

“They promised not to impose any solution, and now they want the meeting for the sake of the meeting.”

Erekat said it was as if they were telling the Palestinians, “Come here boy, we know what’s good for you.”

Trump’s unilateral recognition broke with decades of international consensus that the city’s status must be negotiated between the two sides.

The US leader says he still intends to reach what he has called the “ultimate deal” — Israeli-Palestinian peace — but Palestinian president Mahmud Abbas has called his efforts the “slap of the century”.

The Trump administration also hit out at Abbas last week, with UN ambassador Nikki Haley saying he lacked the courage needed for a peace deal.

Erekat likened her comments to a call for a “coup d’etat”.

He alleged the Palestinians could have “Mother Teresa” as president, but Trump, Haley and Netanyahu would not accept her if she called for a two-state solution based on pre-1967 borders with east Jerusalem as the Palestinian capital.

Israel also occupied the West Bank and the Gaza Strip in 1967. It has since withdrawn from Gaza, but continues to occupy the West Bank.
Netanyahu accuses the Palestinians of refusing to negotiate and of not recognising Israel as a Jewish state.

The Palestinians say they are open to talks under parameters that can lead to progress.

The PLO has long recognised Israel, though not as a Jewish state.

Hamas, the Islamist movement that runs the Gaza Strip, does not recognise Israel, with whom it has fought three wars.

Asked whether he believed the two-state solution was already dead, Erekat argued Trump and Israel’s right-wing government were in the process of destroying it.

He said doing so would lead to “an enlargement of the cycle of violence, extremism and counter-violence”.

Erekat said his last meeting with the Trump administration was on November 30 at the White House with the president’s son-in-law and adviser Jared Kushner and his envoy Jason Greenblatt.

There had been some 35 meetings at various levels in total since February last year, he said, but no details on the peace plan the White House says it is working on have been shared with the Palestinians.