Neithe­r side made any mentio­n of the minist­ries offere­d to the MQM in the new setup.
By Salman Siddiqui
Published: May 5, 2011
Tweet Email 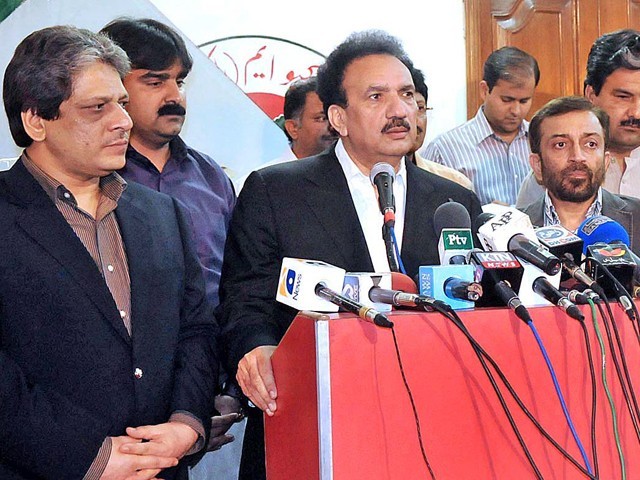 The Pakistan Peoples Party (PPP) achieved a major breakthrough late on Wednesday when it managed to woo its estranged coalition partner the Muttahida Qaumi Movement (MQM) back into the federal cabinet.

The bickering between the two sides appeared to be a thing of the past at the Governor House on Wednesday night as a beaming contingent of MQM senior leaders, including Dr Farooq Sattar, Babar Ghauri and Dr Sagheer Ahmed along with Governor Ishratul Ibad and Federal Interior Minister Rehman Malik professed the setting aside of all differences ‘for the sake of democracy and reconciliation’.

“We have decided to rejoin the federal government,” Sattar announced, stressing that the decision was made possible only because of the good relations and spirit of reconciliation demonstrated by MQM chief Altaf Hussain and President Asif Ali Zardari.

Malik said he welcomes his ‘friends’ from the MQM back into the federal cabinet and added that he would like to dedicate this milestone to the friendship between the chiefs of the two parties. “PPP-MQM unity is for the good of the public.”

Sattar, who held the overseas Pakistanis portfolio and Ghauri, who was the ports and shipping minister, had resigned from the federal cabinet late last year after differences developed between the two coalition partners over a controversial statement made by then home minister Sindh Dr Zulfiqar Mirza.

Although the MQM continued to sit in the treasury benches, there was always the lingering threat that it would shift its 25 seats to the opposition, which threatened PPP’s majority in the parliament that had already been weakened with the departure of Maulana Fazlur Rehman’s Jamiat Ulema-e-Islam-F.

On Wednesday, however, neither side made any mention of the ministries offered to the MQM in the new set up in which the PML-Q also has a huge role. Malik denied reports that the MQM had been offered three federal ministries, including ports and shipping, labour and manpower and the provincial home department slot in exchange for joining the cabinet. “There were no  discussions about any ministries today,” he insisted, adding that the prime minister’s office would make an announcement to this effect.

MQM’s decision to rejoin the cabinet came after a flurry of activity on both camps. A five member delegation of the MQM along with the governor had met the president a day before on Tuesday.

Also, earlier in the day on Wednesday Malik visited MQM headquarters Nine Zero. Sattar said the PPP leader offered his condolences for the murders of MQM workers, including Liaqat Qureshi and Farooq Baig.

Malik said there would be action against target killers in the city. “The IG Sindh and DG Rangers have been directed to take action against all criminals no matter under whose banner they operate, the Peoples Aman committee, the PPP or the MQM.”

Sattar said the MQM had stressed on three points in the discussions held today, including law and order, and action against target killers in Karachi; extortion rackets operating in the city to which many traders and industrialists are a hostage; and conspiracies to derail the economic hub of Pakistan.

“We have been assured that all are reservations will be removed and a sense of participation would be given to us as coalition partners,” he said.

The MQM leader added that he was looking forward to a people friendly budget and that the government would complete its tenure.

The interior minister said the country’s intelligence agencies and Pakistan Army were being ‘unduly’ blamed, especially by the Western media. “Nothing is what it seems,” he said. Although Malik did not say how the government planned to clear the air by saying  that new information would be shared with the public regarding Osama bin Laden’s killing in Abbottabad, he urged the people to dispel the negative propaganda.

He said the police, Pakistan Army and the ISI remained on high alert to ward off any threats by terrorists.