Osama bin Laden's fame can be guesse­d from his covera­ge done extens­ively all around the world.
Sunday Magazine Feature
By Zarrar Khuhro
Published: May 8, 2011
Tweet Email 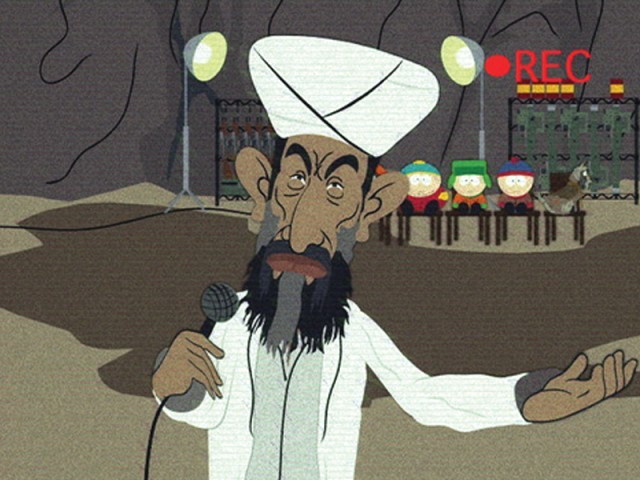 Ali Zafar’s comedic venture Tere Bin Laden focuses on the misadventures of a young reporter desperate to migrate to the US. When his efforts fail due to an unfortunate in-flight incident, he comes up with a cunning plan. Finding a bin Laden look-alike, he records fake Osama videos in an effort to sell them to TV channels and make a quick buck. With Osama’s death, rumour  has it the producers are considering re-releasing the movie in Indian theatres.

Osama showed up in the satirical “4 man show”, where he was ‘interviewed’ by the hosts in a fairly hilarious segment. Osama made more than a few appearances on the show while it was on air.

This satire show also took a jibe at the global hunt for al Qaeda chief in a parody of singer Rahim Shah’s song. The parody was titled “Osama de, Osama de”.

A Case of Exploding Mangoes

OBL, as he calls himself, makes a guest appearance in Muhammad Hanif’s satire A Case of Exploding Mangoes. He shows up at a Kabul-Texas themed barbeque dinner at the US ambassador’s residence in Islamabad in a suit, is mocked by a local journalist and flits around from conversation to conversation.

The show that spared no one, didn’t spare Osama either. The first post-9/11 episode of “South Park” showed the four main characters meeting their Afghani counterparts and getting captured by bin Laden himself.

Not to be left behind, the animated show “Family Guy” also starred bin Laden several times. His first appearance was on the episode PTV, in which Osama is seen trying to record a threatening message, but failing repeatedly, and cracking jokes at his fumbles. Then Stewie shows up and beats everyone up. Osama bin Laden also appeared a few other times on the show, but many of his appearances never made it on air.

American rapper Marshall Bruce Mathers III, better known as Eminem dressed up as bin Laden in his video “Without me”. The video shows Osama dancing in a cave while recording a video message, getting chased by a bunch of guys and then finally waving a white flag.

Not the Al-Pacino/ Keanu Reeves film, but rather the controversial Dutch reality TV show “Devil’s Advocate”. The show features star defense attorney Gerard Spong standing up for some of the world’s worst criminals, and in one show he convinced the five member jury that there was no evidence linking Osama to the 9/11 attacks.

Where in the World is Osama bin Laden?

A somewhat lukewarm attempt to put a new spin on the War on Terror, this quasi-documentary by Matthew Spurlock (of Super-size Me fame) shows Matthew searching for bin Laden on his own. It bombed. No pun intended. On a related note, bin Laden’s death has thrown director Kathryn Bigelow’s planned Osama movie into doubt.

Osama bin Laden merchandise was always a big seller in international markets, and ranged from latex masks to t-shirts and mugs. Following his death, enterprising companies and individuals have released new lines of merchandise to cash in on the event.

Published in The Express Tribune, Sunday Magazine, May 8th, 2011.