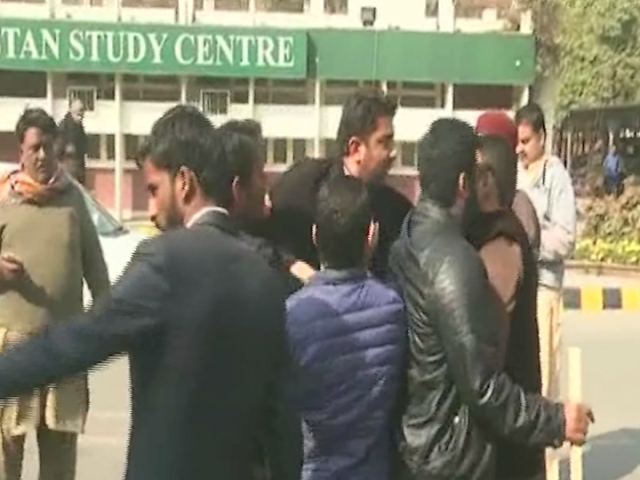 Following a row of clashes between student groups at Punjab University (PU), members of the Islami Jamiat Talaba (IJT) held a sit-in outside the Vice Chancellor Dr Zakaria Zakar’s office on Monday morning demanding action against the rival group for sabotaging their annual festival.

The police reached the site of the incident and dispersed students of both the organisations. There is still a mass presence of police personnel on the university grounds and tensions are high.

Members of Pakthun Baloch Students Union (PBSU), at approximately 4:45am began a protest against Pioneer Festival, organised by IJT. The protest resulted in a clash between the two groups.

The IJT had given PU administration until 11:30am to find those responsible for ruining their festival. Soon after the deadline passed, IJT observed no progress which led to a clash between the students and the police on campus.

Media personnel and outsiders have been prohibited from entering the university. Classes in the engineering department have been cancelled.

According to sources in PU, the VC reached the incident site at approximately 5 in the morning, and the administration controlled the tense situation. Dr Zakaria ordered the administration to identify the involved agitators and take prompt action against them.

According to students, the fire that was set partially destroyed the room. The staff on site and the fire brigade promptly put out the fire. Sources inside the university have said that the administration will ensure that law and order is maintained on university grounds, stating violence will not be tolerated.

In February last year, students and activists belonging to Pakhtoon Education Development Movement (PEDM) and IJT clashed outside PU hostels, which left around a dozen injured and at least 3 students hospitalised. The police was called in to maintain peace, when the students pelted stones and fought with sticks.