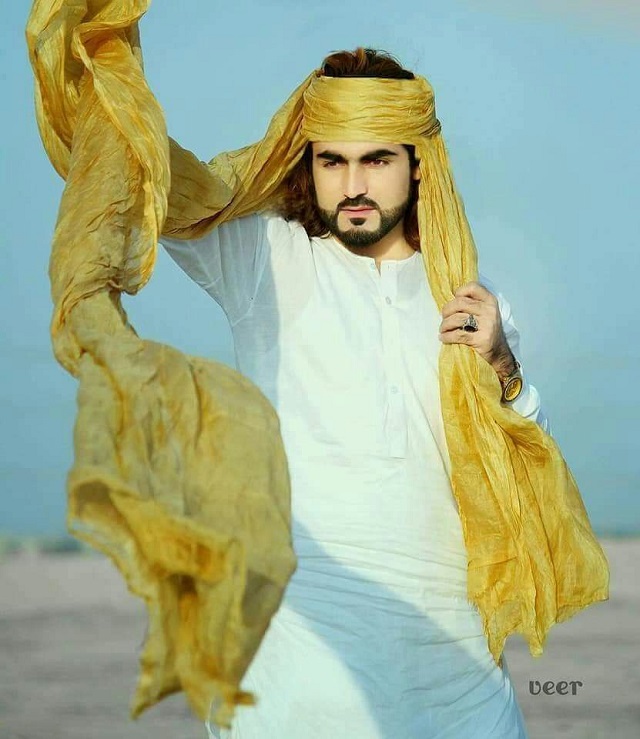 Inspector General of Police in Sindh Allah Dino Khawaja on Thursday constituted a three-member committee to investigate the killing of four alleged terrorists in Karachi by a police party led by SSP Rao Anwar.

The committee, headed by Additional IG CTD Sanaullah Abbasi and comprising DIG East Sultan Khawaja and DIG South Azad Khan, will also record statements of the family members of the alleged terrorists as well as witnesses.

On January 13, SSP Anwar had claimed to have gunned down four members of the defunct Tehreek-e-Taliban Pakistan (TTP) in an encounter near Shah Latif Town in Karachi.

However, family members of one of the alleged terrorists, Naseemullah Mehsud, claim that he was an aspiring model, and was killed by the police in a fake encounter.

“His dreams of becoming a super model were shattered when the Karachi police killed him in a fake encounter calling him a terrorist,” said Rehman Mehsud, a cousin of Naseemullah, while talking to The Express Tribune. “It is an extrajudicial killing.”

The family claims that Naseemullah alias Naqeebullah had no links with any terror outfit. 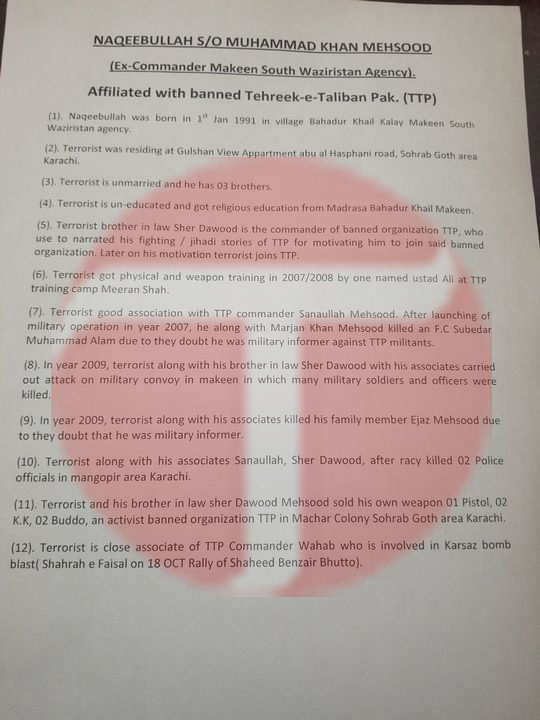 He was a handsome young lad with attractive features, said Rehman, adding that the father of three would religiously post his photos on social media, receiving likes and comments from friends and others.

According to details, Naseemullah had arrived in Karachi a year ago and was living at Sohrab Goth. He had rented two shops over there to run his clothing business.

On January 3, plainclothes personnel had abducted him from a teashop in Sohrab Goth.

“Some personnel in plainclothes came and whisked him,” said a witness, asking for anonymity. “We did not know who he was, at that time. But we knew that such incidents happen in Sohrab Goth.”

Witnesses said that some personnel were also in uniforms. 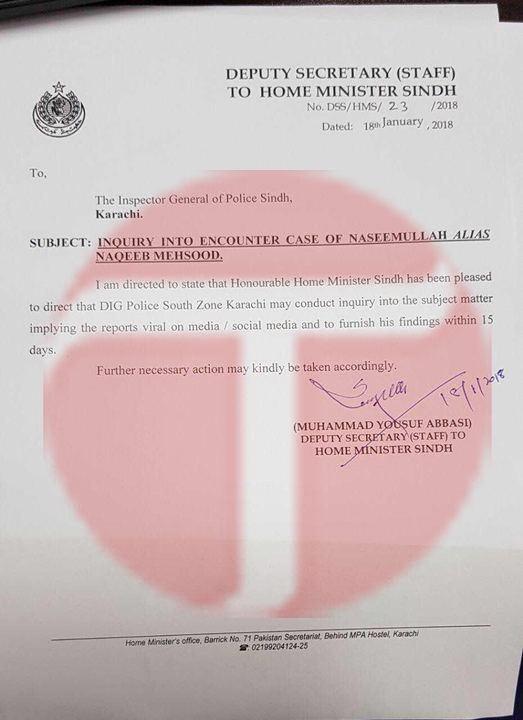 They found Naseemullah’s body at Chhipa Welfare Association morgue. His funeral prayers were performed at Sohrab Goth and his body was moved to D I Khan where he was laid to rest amid tears and sobs.

“We have buried him (Naseemullah) but have not buried his case. We will fight for him until our last breath. God will take revenge of his brutal killing if we fail,” said Mubarak Shah, a relative of Naseemullah.

“The entire area is in the control of Malir police, who abduct and kill people in fake encounters,” said Burhan Khan, a resident of the area. “Everyone here is afraid because a majority of the people living here are Pashtuns and if we raise our voice against the system, the same will happen to us.” 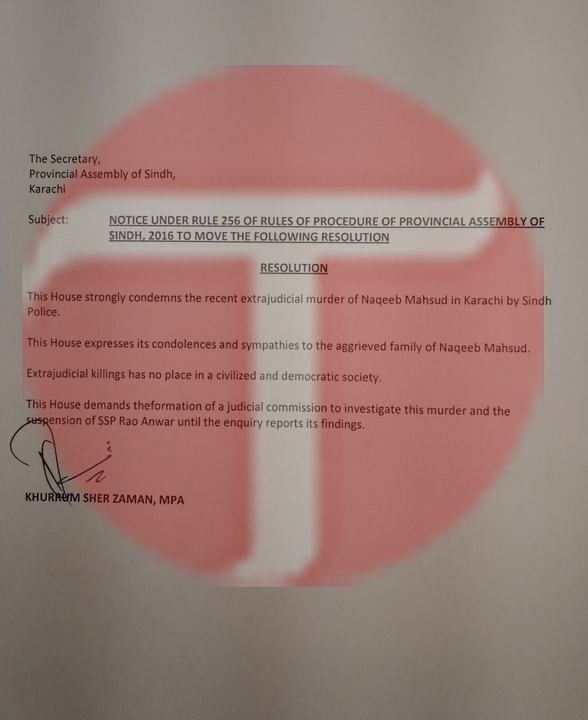 Khurram Sher Zaman, a Pakistan Tehreek-e-Insaf MPA, said, “I will raise my voice for Naqeeb in today’s Sindh Assembly session.” He alleged that ‘encounter specialist’ Rao Anwar was the one who shot and ultimately killed Naqeeb.

“I couldn’t sleep all night because I couldn’t get Naqeeb out of my head. It’s really sad to see how our law enforcement agencies treat citizens. These fake encounters must end. We demand justice for Naqeeb,” he added.

Taking notice of the outcry on social media against the ‘extrajudicial’ killing, Pakistan Peoples Party (PPP) Chairperson Bilawal Bhutto Zardari ordered an inquiry into the matter. Bilawal tweeted on Thursday that he had asked the home minister to conduct an inquiry into the case.

According to SSP Anwar, Naqeebullah was an ex-commander of Makeen area in South Waziristan Agency.

“The terrorist was residing at Gulshan View Apartments, Abul Isphani Road in Sohrab Goth area,” reads the profile of Naqeebullah, prepared by the Malir SSP.

According to the profile, Naqeebullah also stated that his brother-in-law Sher Dawood is a TTP commander who motivated him into joining the banned organisation.

“The terrorist received physical and weapons training in 2007-08 by Ustad Ali at a TTP training camp in Meeran Shah,” it said, adding that in 2009 Naqeebullah, along with Sher Dawood, carried out an attack on a military convoy in Makeen in which several soldiers and officers were killed.

Senior police officials have also cast doubt over what was claimed to be a suicide attack on SSP Anwar’s team a couple of days ago.

Similarly, on Twitter the trending #JusticeforNaqeeb was used by many users who called for justice to be served in the man’s killing.

Bullet riddled of Naqeebullah Mehsud recovered. According to his relatives, he was arrested by police a week ago from his shop in Sohrab Goth area #Karachi
It should be Investigated #JusticeforNaqeeb @CMMuradAliShah @BBhuttoZardari pic.twitter.com/87OinGDGUz