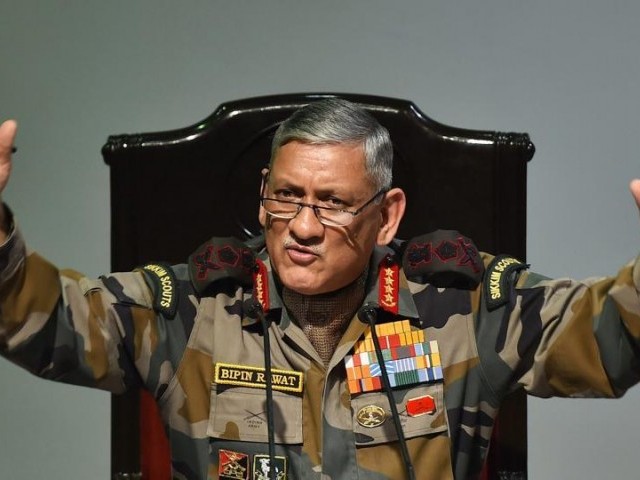 Last week India’s Army Chief, General Bipin Rawat, made a highly provocative statement in which he claimed that his forces were ready to call “Pakistan’s nuclear bluff” and conduct a cross-border operation if ordered by the government. This, as expected, led to a series of rebuttals from our civilian and military leadership. Foreign Minister Khawaja Asif termed it an invitation for nuclear encounter and the minister of interior labelled it as irresponsible. The ISPR chief was even more forthcoming. He thought the remarks were unbecoming of a person in that position and threw a challenge that India if so wished could test Pakistan’s resolve.

General Rawat’s statement smacked of arrogance that had overtones of false machismo and misguided bravado. Unfortunately, this ugly trend that has taken root in the Indian armed forces leadership is merely another face of the Modi government’s belligerence towards Pakistan. The aim is to keep the pressure on Pakistan through multiple means.

From an Indian perspective this policy neatly fits in with the United States’ current stance towards Pakistan. It converges with their present strategic partner’s policies to keep Pakistan off balance. As an extension of it the Cold Start doctrine that was in cold storage is once again being revived by India. Pakistan has been emphatic that any misadventure by India in the form of a unilateral attack on its territory will find a befitting response. India, according to its army chief, however, feels that this would not deter them and is prepared to undertake the risk. India would be sadly mistaken if it thinks it can get away by launching a limited attack on Pakistan on the pretext of a perceived or concocted intrusion. This would be a highly dangerous path that India would be trading as was mentioned both by our civilian and military leadership. It would push both the countries into an unpredictably dangerous course.

The Indian claim that they are victims of terrorism emanating from Pakistan is falsified when you compare their figures of casualties with ours. Similarly, if we look at the increase in India’s defence budget of the last two years it is equal to our total defence budget. So in essence the blame game is all Indian propaganda that the international community should take notice.

Indian policymakers may be under a mistaken belief that Pakistan is in disarray and it is an opportune time to engage in risky ventures. Not realising Indian hostility is one factor that unites us like no other.

If we were to take the Indian army chief’s threat at its face value and develop a likely scenario this is what would happen: India launches a surprise attack on Pakistani territory and seizes it. There is every likelihood Pakistan would retaliate with a similar strike on Indian territory. This chain of events would certainly lead to further escalation and this is where the danger lies. It is not going to be that manageable as the current hostile firing at the Line of Control has been.

Even the firing at LoC is reaching a dangerous level. This is a senseless activity that clearly nuclear powers are not supposed to venture into. What if it only brings the two armies on the border as happened earlier? How would it affect investments and economic progress? If past experience is any guide, investments start shying away as clouds of war start hovering.

To target Pakistan in order to deflect attention from the gruesome happenings in Kashmir will also be a grave mistake by India. In fact it will bring into sharp focus India’s disastrous Kashmir policies to which the international community so far has been deliberately oblivious. Burhan Wani’s extrajudicial killing by Indian forces sparked an uprising that continues till date despite heavy handedness and brutal repression.

A more sensible approach that India refuses to accept is to find a political solution to the Kashmir issue. This would create an amiable environment between the two countries and shift priority from waging insurgency to political engagement.

The meeting of General Janjua with his India counterpart Ajit Doval could have been a start of that process but there are no signs of it. In the absence of dialogue, and harsh statements by a hawkish military chief and relentless fire at the LoC, what future prospects do we have for peace?

The US could have played a major role in moving India and Pakistan towards dialogue. It has been hesitant knowing India’s intransigence although it could have a positive impact on the Afghan situation as it is very much influenced by it. Pakistan is apprehensive of India’s designs in Afghanistan that are mostly directed towards destabilising Pakistan. The plea it takes is that it is a payback of Pakistan’s support of anti-Afghan and anti-Indian militant groups that Pakistan cultivates. In reality, India is deliberately promoting a two-front strategy to lock the Pakistan Armed Forces on the eastern and western fronts.

India, along with the US, is averse to Pakistan’s growing proximity with China. The CPEC project in particular is looked upon with great distrust and India would like to create hurdles in the way of its implementation. This is the main reason for India’s support of Baloch nationalists.

Moreover, Modi’s government wants to take advantage of Pakistan’s internal weaknesses. Indian policymakers probably are of the view that Pakistan’s current political waywardness, civil-military divide and its strained relation with the US is an ideal scenario for India to provoke it.

Modi’s policy towards Pakistan also fits in very well with his general distrust of Muslims. It is, however, possible that India could face problem in acquiring the great power status unless it develops a modicum of relations with Pakistan and is more willingly accepted as a benign power by other countries of the region. Whereas Pakistan’s ability to deal with India more effectively would very much depend on its ability to consolidate democracy by resolving its internal contradictions, especially the imbalance between civil-military relations. Otherwise the antagonistic powers will continue to take advantage of our fragile democracy.