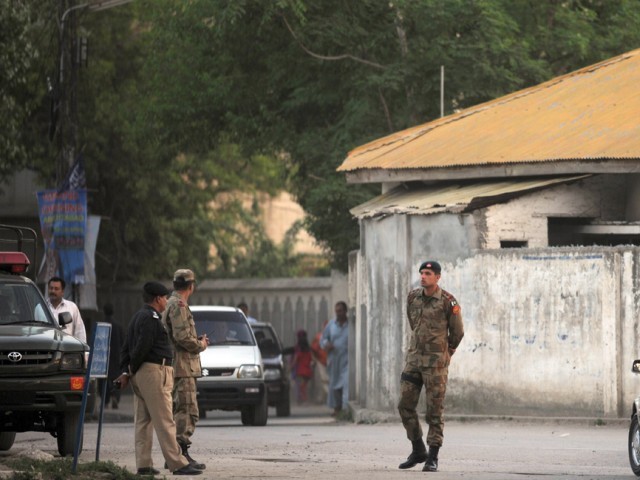 Pakistani soldiers and police officials keep vigil near a building the hideout of Al-Qaeda leader Osama bin Laden after his death by US Special Forces in a ground operation in Abbottabad on May 2, 2011. Pakistan said that the killing of Osama bin Laden in a US operation was a "major setback" for terrorist organisations and a "major victory" in the country's fight against militancy. PHOTO: AFP

ISLAMABAD: Pakistan on Tuesday said that the US Central Intelligence Agency (CIA) had exploited intelligence leads given by the Inter-Services Intelligence (ISI) to identify and reach Osama bin Laden.

A lengthy statement released by the Pakistani Foreign Office said that ISI had been sharing information about the compound with the CIA and other friendly intelligence agencies since 2009 and had continued to do so until mid-April.

“It is important to highlight that taking advantage of much superior and technological assets, CIA exploited the intelligence leads given by us to identify and reach Osama bin Laden.”

The statement denied any prior knowledge of the US raid that killed Osama bin Laden, but said it had been sharing information about the targeted compound with the CIA.

The al Qaeda leader was shot dead by US Special Forces in an attack on a sprawling compound near a military academy in the northwestern town of Abbottabad early on Monday.

While Islamabad hailed the killing of bin Laden as an important milestone in the fight against terrorism, the statement said Pakistan had expressed “deep concerns” that the operation was carried out without informing it in advance.

“This event of unauthorised unilateral action cannot be taken as a rule,” the ministry said.

According to the statement, US helicopters entered Pakistani airspace by making use of “blind spots” in the radar coverage caused by the hilly terrain surrounding Abbottabad.

The foreign ministry said the Pakistani air force scrambled its jets within minutes of being informed of the US operation but there was no engagement with the US forces as they had already left Pakistani airspace.

Osama’s will: Bin Laden says his children must not join Al Qaeda