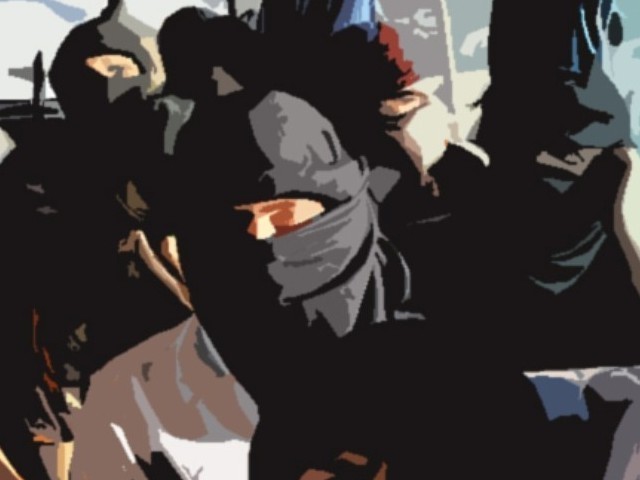 The three terrorists were killed during a late night operation in the Qaimkhani Colony area of Baldia Town. PHOTO: AFP

KARACHI: Three terrorists killed on Tuesday night during a joint raid by the Rangers and Counter-Terrorism Department (CTD) were associated with the Ustad Aslam group of the Tehreek-e-Taliban Pakistan (TTP), it was reported on Wednesday.

The three terrorists were killed during a late night operation in the Qaimkhani Colony area of Baldia Town when the Rangers and CTD jointly conducted a raid at their hideout. An exchange of fire took place between the law enforcers and terrorists during which three terrorists were killed and a few managed to escaped under the cover of fire. The law enforcers also claimed to have seized two suicide jackets, arms and ammunition during the raid. Two Rangers personnel and one CTD official were also wounded in the exchange of fire.

The bodies were shifted to the Edhi morgue in Sohrab Goth where they were identified to be those of Abdul Kareem Swati alias Mufti, Muhammad Ahmed alias Maulvi Abdullah and Yousuf alias Shahzada alias Noman Burmi.

Confirming the identities of the slain militants, a Rangers spokesperson said the terrorists were associated with the Ustad Aslam group of the TTP and were wanted in several cases of terrorism.

Sources in the CTD said the deceased militants were trained and were reorganising their group in Karachi for a major terrorist activity in the city. The sources added that the deceased terrorists were linked with the militants killed during an encounter with the Rangers in the Urdu Bazaar area last year. Three militants, a woman and minor child were killed in that encounter.

Cases were registered against the militants while further investigations are under way.