There are also concer­ns the Assam state govern­ment, could use the issue to target the state's Muslim minori­ty
By AFP
Published: January 1, 2018
Tweet Email 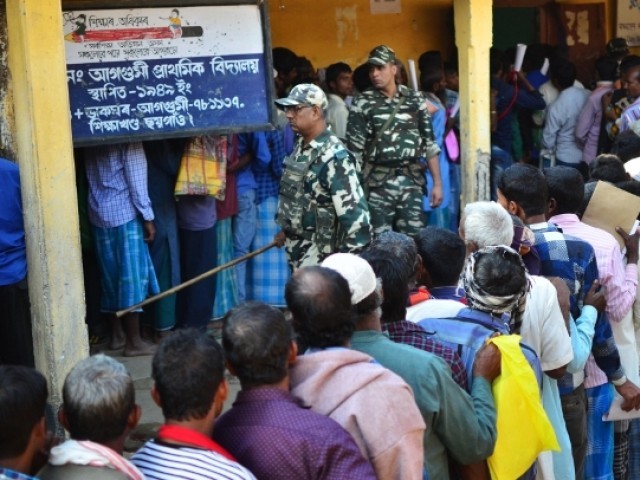 People stand in line to check their names on the first draft of the National Register of Citizens (NRC) at Gumi village of Kamrup district in the Indian state of Assam on Monday. PHOTO: AFP

NEW DELHI: Around 13 million people living in northeastern India’s largest state have been left off a controversial draft list of citizens released Monday by authorities, who are under pressure to identify and expel illegal immigrants.

Assam has long struggled to curb immigration from neighbouring Bangladesh and is the only Indian state to compile a register of citizens.

The latest draft list includes only 19 million of the state’s more than 32 million residents. It was prepared on the orders of the Supreme Court, which is hearing a series of claims to Indian citizenship from undocumented residents of the state.

But there are also concerns the Assam state government, which is led by Prime Minister Narendra Modi’s Hindu nationalist Bharatiya Janata Party (BJP), could use the issue to target the state’s Muslim minority.

Political leaders have vowed to deport anyone staying in the state illegally, although it is far from clear that Bangladesh would accept them.

The BJP won elections in the state in 2016 after promising to root out illegal immigrants from mainly Muslim Bangladesh and protect the rights of indigenous groups.

Migrants have long been accused of illegally entering the state from Bangladesh and taking land, causing tensions with local people and sporadic outbreaks of communal violence.

Anyone living in Assam must now prove that their forebears appeared either in the state’s only previous register of citizens, compiled in 1951, or on any electoral roll published before March 1971 to be eligible for citizenship.

With millions anxious about their fate, the government strengthened security across the state before releasing the list.

Upamanyu Hazarika, a senior lawyer who has campaigned against illegal immigration in the state, said the process of acquiring citizenship had been dogged by corruption.

“The Supreme Court will also have to address the complicated fate of children born to Bangladeshi illegals on Indian soil after 1971,” he added.