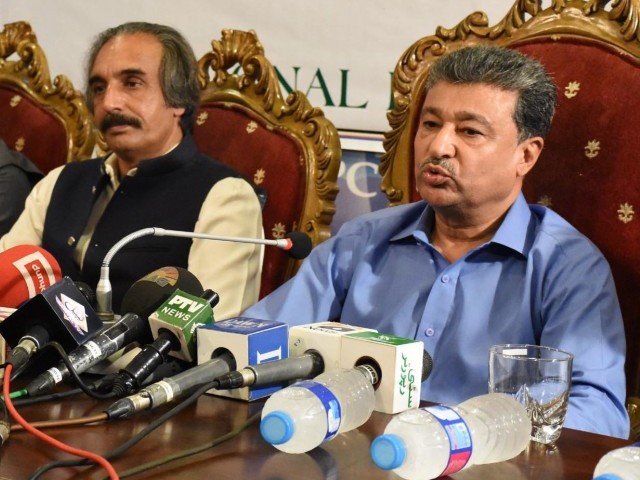 ISLAMABAD: Frustrated by the constant disregard of their complaints, local government councillors from both sides of the aisle on Thursday disrupted the latest session of the Islamabad Metropolitan Corporation.

Due to the disruption, the session could only discuss two of the six-point agenda

As Islamabad Mayor and Capital Development Authority (CDA) Chairman Sheikh Anser Aziz opened Thursday’s session of the council at the Pak-China Friendship Centre, some councillors sitting at the back of the hall raised slogans inscribed with their demands.

They subsequently started chanting slogans over their lack of power and treatment meted out to them by the local government administration and slowly crept towards the mayor’s desk.

Islamabad must ‘demonstrate’ its desire to partner with the US, says Rex Tillerson

When they were right on top of the mayor and stopped him from holding the meeting smoothly, Aziz prorogued the session and invited councillors to talk in an adjoining room.

During the meeting, the councillors reiterated their complaint that the government had failed to give any power or funds to the union councils of the Islamabad Metropolitan Corporation (IMC) two years after the local government set up was first established in the capital.

Holding him responsible for their plight, the councillors asked the mayor to identify a timeframe within which they would be empowered apart from fulfilling their other demands.

The councillors also complained about the lack of teamwork apart from the failure of chairmen to convene meetings at the union council level.

The mayor pointed out that this was the first time that a local government system had been set up in the capital. Reiterating his commitment to the success of this system, he explained that they had run into legal complications but were trying to redress them.

However, the meeting concluded without any concrete outcome and councillors continued their protest.

The IMC session too resumed and the house discussed the performance of IMC’s Environment Wing. They also reviewed the status of slums in the capital.

Councillors presented different suggestions to improve the performance of environment wing. The mayor suggested that workers of the wing would be deputed in all union councils under the supervision of IMC’s elected members so that their skills could be used to upgrade and monitor parks.

“Two years have passed and we have yet to develop the rules of business. Until such issues are resolved, the local government system cannot be strengthened,” said Pakistan Tehreek-e-Insaf’s (PIT) Ahmed Shahzad who hails from Sector G-11.

He lamented that markets had been built over green belts while the number of shanties in the city was increasing rapidly and allegedly in connivance with officials of IMC’s environment wing.

Abid Raja pointed out that two fresh slum towns had developed recently in his union council.

Shahzad further alleged that there were ghost employees working in environment wing. He suggested installing biometric systems to check the attendance of employees and weed out the ghosts.

He further said that wheat was being grown near Meerabad with the connivance of the forest guard while the city’s graveyards were also being encroached upon.

Menira Javed, a chairman on the reserved seat, drew the attention of the house towards the large number of paper mulberry trees which were causing allergies in the capital.

Concerned over the mushroom growth of shanty towns, the dilapidated condition of parks and pollen allergy caused by paper mulberry, the councillors asked for concrete measures to address these issues.

Lamenting that slums were being built by encroaching on storm drains, Chaudhary Muneer called for devising a mechanism between the Katchi Abadies cell and the environment wing.

At this stage, Sardar Mehtab – a Chairman from Sector I-9 pointed towards a shortage of the quorum.

Opposition Leader Ali Awan demanded that the Katchi Abadi cell and the environment wing geotag all the slums to help block the spread of the shanty towns and to present a report in this regard before the house at its next session.

He went on to demand that 32 shanty towns must be regularised while shares from the local government fund should be given to union council chairmen in the rural areas.