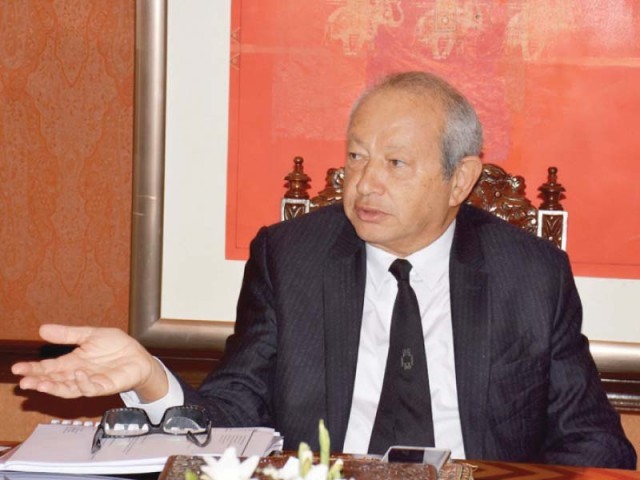 ISLAMABAD: It takes 12 years for a traditional schooling system to prepare you for college.

This is also how long it took one Egyptian billionaire and his Pakistani friend, a well-connected political figure and successful businessman no less, to launch a real estate project in the country.

This gives one an idea of the level of difficulty in pursuing business in Pakistan. Red tape, bureaucratic hurdles and plain old-fashioned laziness have become the heart and soul of the system through which projects have to pass if they are to see the light of day.

There is a reason why the country is ranked 147th among 190 economies in the World Bank’s Ease of Doing Business Index.

“It takes a long time (to deal with officials),” said Naguib Sawiris, the chairman of Orascom Telecom Media and Technology Holding that formerly owned a stake in Mobilink, and is one of Egypt’s largest and most diversified conglomerates and the country’s largest private sector employer.

Sawiris’ response came during an exclusive interview with The Express Tribune in which he discussed at length issues facing Pakistan’s property sector, the country’s economy, and his latest real estate venture – Eighteen Islamabad – in which his company, Ora Developers, has partnered with Pakistani conglomerate, Saif Group, to launch a $2-billion project .

“In Egypt, it’s a nightmare to get a building permit. It’s not very different here either. Laws are not clear and this leaves many grey areas, which officials are able to exploit. There needs to be a revolution in Pakistan’s real estate. It took us 12 years to buy the land (for Eighteen Islamabad).”

For a man who has a net worth of over $5.1 billion, according to the Bloomberg Billionaires Index, this is a long time, especially as he admits that he does not have patience.

“Our local partner has helped us here. I am not a very patient man.”

Sawiris’ Ora Developers is partnering with Saif Group – the local conglomerate with business interests largely in textile, real estate and energy sectors – with a 60% and 40% stake, respectively. Another partner, Kohistan Builders and Developers, is part of the project as well. According to details, there is a 30% equity component and an equal share of bank financing.

Talks with Habib Bank Limited have progressed, according to details, and financing challenges will be met through the local bank’s deposit base.

The project is spread over 2.77 million square yards and offers over 2,000 residential units – apartments and villas of different sizes – along with commercial properties. It is meant to cater to the upper middle-income groups and 79 units – belonging to 8-Kanal, roughly 5,000 square yards, category have been sold.

While it is off to a good start, the project has undergone a lengthy journey of negotiations and roadblocks. The trend of changing governments and officials – Pakistan has only seen one elected government complete its five-year tenure – hasn’t helped the cause.

“Ideally, you would want a simpler process in which you buy land (from the government or someone else) at a rate that is determined officially so there is no haggling. Then, a private developer should start construction work and assume the cost through till the end.

“This way, prices will remain competitive and affordable.”

While demand-supply dynamics mean that property prices have continued to increase in Pakistan – especially as the country has become relatively safer in the last two to three years – there are other reasons for the exorbitant rates buyers are willing to pay. It is an avenue of investment for many, and a way to stash wealth without paying taxes. With a 10-million housing unit shortage estimated by the World Bank, it is unsurprising that real estate continues to grow.

“Real estate is expensive here. Prices are comparable to those you would find in New York. The government is keen to bring the prices down. But when land isn’t available for private developers, you find there is little competition. The land is hoarded.

“There are no financial programmes available to finance housing. The central bank in Pakistan does not allow loans against properties that are unfinished. How will the middle class afford houses?”

The country attracted close to $2.4 billion as foreign direct investment in 2016-17, an amount making up around 0.8% of its GDP that puts it in the bottom 50 economies of most favoured destination of foreign investors.

“Investors can go anywhere. There are a lot of options available.

“Real estate is very important. It gives employment to a lot of sectors – cement, steel, landscaping, furniture as well as other industries.”

Meanwhile, Sawiris’ view on Pakistan’s economy was simply articulated. “Businesses like stability – this includes stability in currency, policies and governments. Regular change in any of these things isn’t a good thing.

“When you have policymakers who don’t understand business you have laws that scare away investors.

“What governments don’t understand is that you can’t beat the market. You cannot win against an entrepreneur or a business. What you have to do is align your interests with his. The moment you go against his interest you will lose.”

With a successful career, Sawiris’ advice to entrepreneurs was also simple.

“Never take no for an answer. Always trust yourself and be persistent. Don’t give up. Also, listen to people with experience. Lastly, since I am a religious man, belief in God is crucial.”