Vanessa O’ Brien: The mountaineer in love with K2 and Pakistan

Vanessa O’ Brien: The mountaineer in love with K2 and Pakistan

First Britis­h-Americ­an woman to scale peak says she wants to help countr­y in any way she can
By Taha Anis
Published: December 21, 2017
Tweet Email 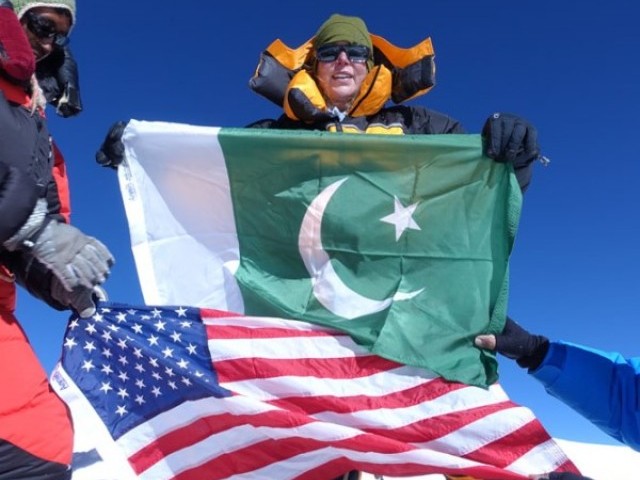 KARACHI: “The K2 promises one thing and one thing alone; that for every four that climb, one will die.”

Those were odds Vanessa O’ Brien fancied. On July 28, 2017 she became the first British and American woman to scale the K2. It took her three trips to Pakistan and years of planning to finally slay her white whale. In doing so, she fell inexplicably in love with the country and its people.

“I like to call mountaineering the original World Cup,” she said, speaking with passion so overwhelming that it moved all those present inside the ninth floor suite of Karachi’s Marriott Hotel. “When Sir Edmund Hillary went to claim the top of Everest for Great Britain, this was how countries proved that they were the best. They competed by getting on top of a mountain. In the 50s, all the countries competed to be number one.”

Mountain climbing is not a sport for the faint-hearted and only those with strong bodies and stronger minds can survive. “You must arrive in the best shape of your life,” she said. “However, over the next six to eight weeks, it will deteriorate since you can’t exercise there. But I believe it is more of a mental challenge than a physical one. The mental challenges that you face are bigger barriers as compared to the physical ones.”

Conditions, Vanessa explained, are so hostile that even imagining them makes the listeners feel a little uneasy. “These mountains are in the middle of nowhere. They are 300km from the closest city and the last 100km is on foot. It’s hard to get there to begin with,” she said. “You have objective dangers such as crevices, avalanches, rock falls. Winds of over 60kph are not uncommon and temperatures can get below -40C. It is so uncomfortable that the will power, determination and courage you require to stay in that position is more important than any physical preparation.”

There are times, though, that even the toughest of men and women break down when faced by a constant barrage of such unforgiving hostility. “I came very close to quitting while I was scaling the Everest,” admitted Vanessa. “During such times you have to use devices in order to distract yourself. Either sing some songs or count or something along those lines.”

Other threats, subtler yet just as deadly, wait at every corner. “In the death zone, which is 8,000m, your body literally starts to die; your digestive system shuts down, your cognitive ability shuts down and you’re not getting enough oxygen in your system, so you have to force feed your body. You take something that will give you a burst of energy, something like sugar, since you can’t process protein.”

The plethora of dangers mean everyone needs to keep a vigilant eye out for the slightest sign of peril. “We are watching each other to make sure there are no signs of frostbite or cognitive impairment because that could be cerebral edema or the swelling of the brain,” said Vanessa. “If we see any signs of that, we have to get them down quickly. We have to watch each other at all times for any signs of trauma or distress.”

All of this makes mountaineering more about risk management and going at a snail’s pace than the adrenaline-pumping extreme sport that many imagine it to be. “The last 1,000 metres took us 23 hours. Imagine doing anything for 23 hours,” said Vanessa. “That was 16 hours to go up; we were hardly moving. Just to stay in that position, with really high winds and really deep snow; it’s just sheer willpower to stay in that place, knowing that you will get there eventually.”

For the 53-year-old though, it is all worth it. “It all comes down to what you are fighting for,” she said. “What spurred me on were the flags that I had in my backpack — the Pakistani flag of my host nation; the flags of the countries of my citizenship, the UK and the US; and the UN Women flag. Being the first British and American woman atop the K2 spurred me on.”

Mountaineering is risky business and Vanessa says there isn’t a lot of financial reward to look forward to either, for a very macabre reason. “Sponsors look at it and they say ‘what if she dies?’…,” she said. “That makes it almost impossible to find sponsors.”

Recording the journey is not easy either. “We attempt to record as much of it as we can,” said Vanessa. “But it’s hard to get good footage up there due to condensation and low temperatures. You can hire specialists to record it for you — and there are literally just four people in the world who have the skillset required to do so — but that requires money and without sponsorship it becomes even more difficult to do.”

For Vanessa, her three-year relationship with Pakistan has been nothing but pleasantly surprising almost every step of the way. “I knew nothing about Pakistan before I came. Whatever I knew was from the Western media and that was all negative,” she said. “Everyone advised me against coming here. But when I did come here, I was so shocked because I have had an incredible experience. Pakistanis have helped me in every way they could, often going out of their way just to accommodate me. Everyone extended extreme hospitality throughout my journey; it was just unbelievable. It was so dramatically different that I thought how could they have gotten it so wrong? How can perception and reality be so starkly different.”

The former banker’s ties with the country only grew stronger after that first year. “I started developing friends and I came back the second here but the media had still not changed,” she said. “I started understanding more about the country and its history and economy. Over the three years, it is fair to say that I adore the country and I adore its people.”

At this point Vanessa started counting all the positives about Pakistan; speaking almost as passionately as she did about mountain climbing, her eyes glinting in the well-lit room as the fondest of smiles curled across her lips. “I want to help Pakistan in any way possible,” she said. “I come here as often as I can. It’s gone from once a year to twice a year and it will probably become four times a year very soon.”

The K2, the reason why Vanessa came to Pakistan in the first place, has a reputation of being the most challenging peak to scale and the experienced mountaineer agrees. “Absolutely, a hundred per cent,” said the woman who holds the Guinness World Record of climbing the highest peaks on every continent within 295 days. “The K2 promises one thing and one thing alone; that for every four that climb, one will die. That is the only promise K2 makes to the climber.”

Along the climb, the K2 is littered with haunting warnings. “Every year, I came in contact with corpses, body parts and torn clothing,” she said. “I have taken skin and bone samples, I have removed molars, I have taken body parts to the base of K2, I have restored plaques and memorials for 20 missing climbers from 13 nationalities. There is nothing more humbling than doing the graveyard work, but it is necessary to remember those who came before us. I have always felt inspired by those climbers and I feel they were with me during my journey.”

For the uninitiated, the Everest — with its superior height — would seem to be the more difficult mountain to climb but Vanessa explained why that is not the case. “There are three reasons behind it,” she said. “Firstly, the Everest is more accessible. To get to the K2 you have to go through a glacier. People think a glacier is ice, but glacier is really hard rock. Since we are walking so fast, it is almost certain that someone will end up twisting their ankle; they are then taken back to the base camp on a horse or a donkey so that’s the end of their adventure.”

The second issue comes in K2’s shape. “The K2 is shaped vertically; almost like how a child would draw a mountain,” said Vanessa. “Usually mountains aren’t shaped like that; they aren’t vertical all the way up but K2 is vertical all the way up. It doesn’t give you a moment’s rest. It’s hard to make camps and the risk of avalanches, rock falls and crevices is much more prominent due to that.”

Thirdly, the weather on the K2 is as unwelcoming as it gets. “The weather at the K2 is horrible,” she said. “Over three years I had come to realise that the best you can do at the K2 is aim for the least unpleasant weather. You will never get a window of consistently good weather even if you are to look at the next four years.”

By scaling the K2 Vanessa has conquered the biggest challenge she has ever faced in her life but she refuses to rest on her laurels and, despite being 53, wants to go on a few more adventures still. “I would like to either go down to the Mariana Trench. Space is also slightly intriguing. There are also the rainforests.”

For Vanessa and her insatiable wanderlust, there are still many adventures to be had and a plethora of wonders still to be discovered. But in her heart of hearts, there will always be a special place for the land of the K2; the country where she surmounted her biggest challenge.