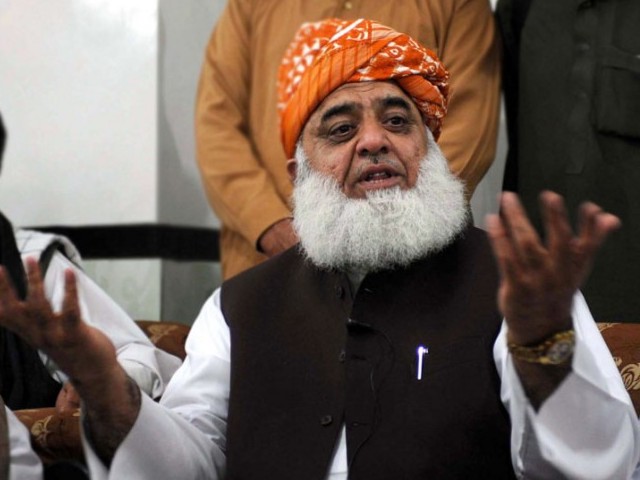 This was the second consecutive meeting of the prime minister with JUI-F chief Fazlur Rehman as the former also met Fazl on Monday night at the latter’s residence.

Sources confirmed that after the Monday meeting, which remained inconclusive, the PM was convinced that Fazl was not likely to budge from his stance. He had, therefore, decided to seek help of the army chief who was to visit parliament on Tuesday.

The army on different occasions has categorically supported implementation of Fata reforms.

Last week, the JUI-F had strongly opposed inclusion of the Fata reforms bill in the National Assembly agenda. This bill was later pulled off the agenda right before the start of the session last week – a development prompting opposition walkout, which is still continuing.

In what was apparently an announcement of the lack of agreement in the meeting, the JUI-F chief later told the media outside parliament that further consultations on the bill would continue.

“We will further hold discussions with the government over the bill,” Fazl said, adding, however, that more meetings with the military leadership were not required. He was not impressed with the way PM arranged his meeting with the army chief and said: “I do not know why the COAS had to intervene in this matter.”

Uproar in NA as govt pulls FATA reforms off agenda

He confirmed that the PM, Minister for States and Frontier Regions Lt Gen (retd) Abdul Qadir Baloch and the National Security Adviser Lt Gen (retd) Nasser Janjua visited his residence last night. “We had a detailed discussion and it was agreed to continue discussions on the matter,” he told reporters.

The JUI-F chief, who has been opposing Fata’s merger with the K-P, said he met the COAS in the PM’s chamber after he was informed that Bajwa wanted to meet him.

“We shared our stance on the issue that we need to garner support and approval of the Fata’s supreme council,” he said, adding that: The PM has agreed to the request of approval from the council.”

In the meeting which lasted about an hour and a half the COAS was accompanied by the Inter-Services Intelligence (ISI) chief and Director-General of Military Operations.

Sources privy to the development told The Express Tribune that the COAS told Fazl to let the issue resolve amicably as every Pakistani wanted implementation of Fata reforms and its merger.

Fazl, however, said he would be in a position to take a decision after consulting his party and Fata supreme council. “If the supreme council agrees to the merger then I will also endorse it,” he told Bajwa.

When a reporter asked if the Fata Reforms Bill would see the light of day in the ongoing session, he replied: “I can’t say anything about the approval of bill in this session”. The NA speaker on Tuesday hinted at the inclusion of bill in the agenda for Wednesday [today].

FATA reforms bill may be tabled in NA today