Turkey to open 'embassy to Palestine in Jerusalem': Erdogan

Turkey to open 'embassy to Palestine in Jerusalem': Erdogan 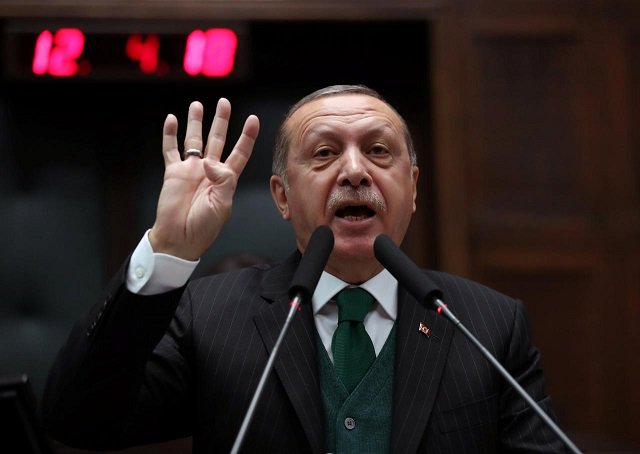 ISTANBUL: President Recep Tayyip Erdogan expressed hope on Sunday that Turkey would soon be able to open an embassy to a Palestinian state in East Jerusalem, as he stepped up his attacks on Donald Trump’s recognition of the city as the Israeli capital.

Erdogan has sought to lead Islamic condemnation of his US counterpart’s move, calling a summit of the leaders of Muslim nations last week in Istanbul who urged the world to recognise East Jerusalem as the Palestinian capital.

East Jerusalem was annexed by Israel after it seized control of the area in the 1967 war, in a move never recognised by the international community.

Thousands of Muslims in Asia protest against Trump’s Jerusalem plan

“Because it is under occupation we can’t just go there and open an embassy,” Erdogan said in a speech to his ruling party in the city of Karaman.

“But, God willing those days are near and… we will officially open our embassy there,” he said, without giving any precise timescale.

Turkey currently has a general consulate in Jerusalem. Ankara has full diplomatic ties with Israel, and like other nations, its embassy is in Tel Aviv.

Erdogan again slammed Trump’s decision to declare Jerusalem the capital of Israel and move the US embassy there, saying it smacked of a “Zionist and evangelist logic and understanding.”

He said Jews had no right to ‘appropriate’ Jerusalem which was the “capital of Muslims”.

“Please stop where you are and don’t attempt any Zionist operation,” he said. “If you try, then the price is going to be high.”

Erdogan hailed the outcome of the December 13 summit which he said showed the “world a vote of unity”. However the meeting was overshadowed by the level of attendance from close US allies Saudi Arabia and the United Arab Emirates, who sent lower-level officials rather than leaders.

Erdogan had warned Muslims, in a speech earlier this weekend, against “internecine warfare”, saying fighting with each other “only helps terror states like Israel”.

Israel has reacted relatively cooly to Erdogan’s repeated broadsides over the last days, although Prime Minister Benjamin Netanyahu said he was “not impressed” by statements made at the summit.

Protests which have been taking place almost daily in Turkey against Trump’s move continued at the weekend. In the mainly Kurdish southeastern city of Diyarbakir, thousands of people turned out Sunday, waving Palestinian flags and brandishing slogans like “the massacres will not stop if all Muslims are not together.”

In a separate speech also Sunday, Prime Minister Binali Yildirim said that “from now on we declare that occupied East Jerusalem is the capital of Palestine”, adding Turkey wanted to see a solution for Jerusalem that satisfied both sides in the conflict.

Erdogan’s spokesperson Ibrahim Kalin — a key foreign policy advisor of the president — wrote in a newspaper article that Trump’s move represented “a toxic mix of populism and unilateralism”. But he wrote in Daily Sabah that one positive consequence was that the issue of the Palestinians was again at the centre of global debate.

“This new momentum should now be utilised to find a fair and lasting peace,” Kalin said.

Last year, Turkey and Israel ended a rift triggered by Israel’s storming in 2010 of a Gaza-bound ship that left 10 Turkish activists dead and led to a downgrading of diplomatic ties.

The two sides have since stepped up cooperation, particularly over a planned gas pipeline in talks spearheaded by Erdogan’s son-in-law and Energy Minister Berat Albayrak.

But Erdogan, who regards himself as a champion of the Palestinian cause, has kept up his verbal attacks on Israel’s policies.