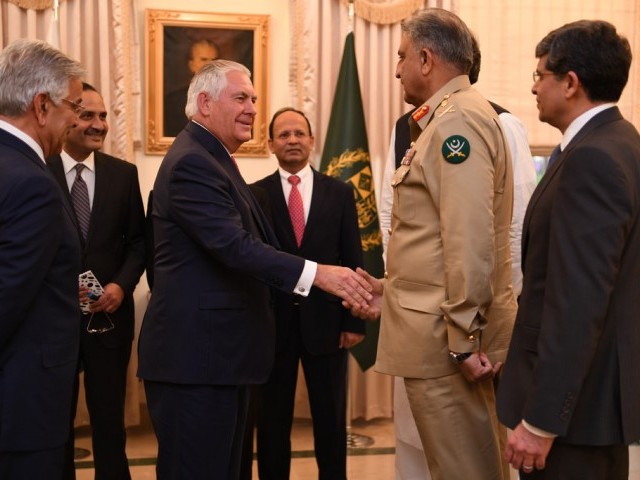 From partners in the war of terror to “do more” requests, the rocky relationship between Islamabad and Washington has seen it all.

The shared tension between the two allies touched new heights on Tuesday when United States Secretary of State Rex Tillerson hinted that Pakistan may lose control of its territory if it does not address the growing “size and influence” of militant organisations in the country.

Speaking at the Atlantic Council, Tillerson stressed that the US was more ‘concerned’ about stability in Pakistan. He said he had warned the leadership of Pakistan that it may become a target. “They [militant organisations] may turn their attention from Kabul and decide they like Islamabad as a target better.”

Pakistan refused to ‘do more’ during Mattis visit: sources

“I understand this is a relationship that has emerged probably for, in their view, good reason a decade ago but now that relationship has to be altered because if they are not careful Pakistan is going to lose control of their own country,” he added.

The foreign office shot down Tillerson’s views on Thursday, stating that Islamabad did “not agree with the comments and perception” of the US secretary of state. It reiterated that “Pakistan has undertaken large scale operations against terrorists and their safe havens across the length and breadth of the country with notable success.”

“These operations are being carried out in our own national interest and Pakistan is determined to rid it’s soil of the scourge of terrorism and extremism.”

In the past months, Islamabad has repeatedly specified that any evidence about the presence of terrorist networks on its soil should be shared with the civil and military leadership while ruling out possibilities of joint operations inside its territory.

Tillerson’s warning comes days after US Defence Secretary James Mattis’s visit to Pakistan made in a bid to renew efforts and find “common grounds” in promoting peace in the region. During the trip, Mattis was told that Pakistan had been prepared to look into the possibility of ‘miscreants’ exploiting Islamabad’s hospitality to Afghan refugees, while on his part he agreed to look into Pakistan’s “legitimate concerns”, including India’s growing footprint in Afghanistan.

US defence chief urges Pakistan to ‘redouble’ efforts against militants

In his talk, Tillerson acknowledged the long history of good relations between the two countries and insisted that the US wanted to work with Islamabad “in a positive way”. “We’re willing to share information with them and we want them to be successful.”

However, he elucidated that the US “cannot continue with the status quo – where terrorist organisations are allowed to find safe havens inside of Pakistan.”