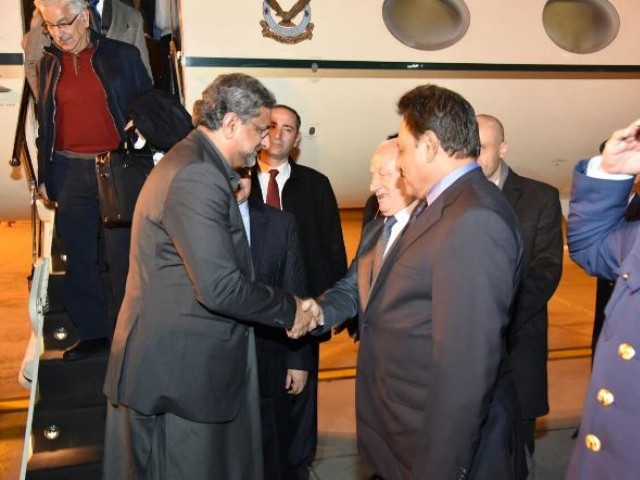 PM Abbasi is welcomed on arrival in Istanbul on December 12, 2017. PHOTO: APP

ISLAMABAD: Prime Minister Shahid Khaqan Abbasi arrived in Istanbul on Tuesday to attend the special Organisation of Islamic Cooperation (OIC) summit on Jerusalem scheduled to be held on Wednesday.

The special summit has been called by Turkish President Recep Tayyip Erdogan in his capacity as the chair of the OIC summit. Most OIC members are expected to attend the day-long conference.

Top leaderships and governments of 26 Islamic states are expected to attend the conference which will explore ways to deal with the situation created in the wake of the Trump administration’s recognition Jerusalem as Israel’s capital.

The summit will also discuss the recent decision by the American government to shift the US Embassy from Tel Aviv to Jerusalem.

Last week, Pakistan had joined the international community in expressing its strong opposition and condemnation of the US decision to recognise the occupied city of Al Quds Al Sharif (Jerusalem) as the so-called capital of Israel and the plan to relocate the American embassy there.