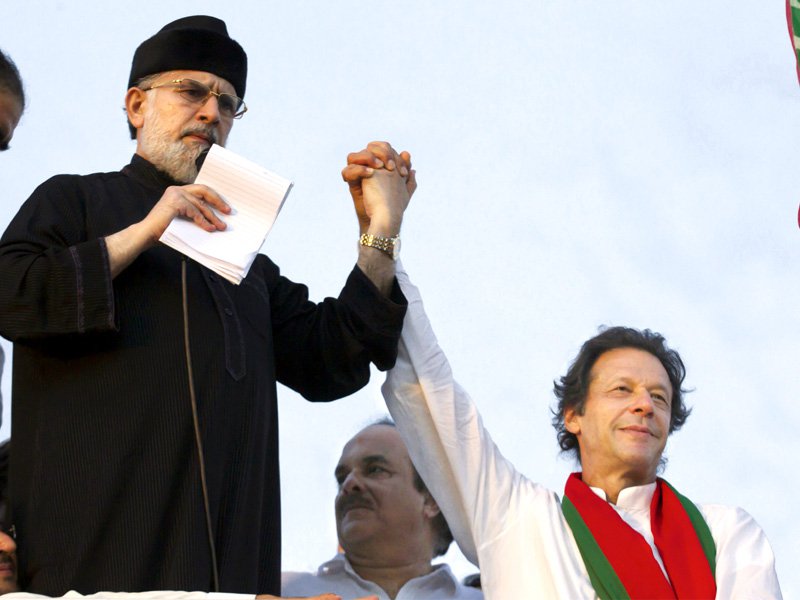 LAHORE: Pakistan Awami Tahreek (PAT) chief Dr Tahirul Qadri has warned that if Punjab Chief Minister Shehbaz Sharif and Law Minister Rana Sannaullah do not step down in the next few days, he will be compelled to take to the streets again.

Speaking at a joint press conference with Pakistan Tahreek-e-Insaf Vice Chairman Shah Mahmood Qureshi and Secretary General Jehangir Tareen here on Saturday, Qadri said Justice Ali Baqar Najfi had proved that both Shehbaz and Sannaullah were involved in the killings of 14 innocent people in Model Town.

“It is our constitutional, democratic and human right to register our protest peacefully if they do not step down and present them before the court of law. Though all parties have their own stance on various issues, political leaders are expressing solidarity with PAT for the sake of humanity and provision of justice to the victims of the Model Town carnage,” he said.

“The consultation with all like-minded leaders has almost been completed. If they do not step down, the people of Pakistan will send them packing,” he said, adding that he would soon make an announcement about a future course of action.

Qadri asked the Supreme Court to constitute a judicial commission – like the one constituted in the Panama Papers case – to probe the Model Town tragedy.

He underscored that neither he nor other political leaders were negotiating any political agenda or any future alliance for the next general election.

Meanwhile, PTI Vice Chairman Qureshi said a five-member PTI delegation met Qadri just to assure their full support to the PAT cause. “PTI Chairman Imran Khan has sent this delegation to express his solidarity with the PAT,” he added.

Responding to a question, Qureshi said although there were differences between the Pakistan Peoples Party (PPP) and the PTI over various issues, on the Model Town incident, all political leaders agreed that the provincial government used force against unarmed and innocent PAT workers in broad daylight.

PTI General Secretary Tareen said the Punjab government kept the report concealed for two and a half years, but now the report had made it clear who was responsible for the Model Town tragedy. He insisted that Shehbaz and Sanaullah had lost moral authority to remain in any public offices.

“Killing 14 people in broad daylight is nothing usual. The PTI will continue its support for the PAT till the resignations of Shehbaz and Sanaullah,” he maintained.

Qadri said that his container was ready if his demands were not met.

PSP Chief Mustafa Kamal said that he had come to express solidarity with Qadri in his fight for justice. “We stand by victims of victims of Model Town until they get justice,” he added. He said the whole world saw the brutality of the police. Kamal added that cruelty had no caste, religion, color, or caste. He vowed to stand with the victims and against cruelty. It was the motto of their party, he added. He said that malicious intentions were obvious from the steps that were taken to keep Justice Najfi report secret.

Kamal said that in Model Town tragedy, two chains of command were followed. “One chain was known to everyone, while the other chain of command was secret.”

When asked why he was not as vocal about the justice for the 313 victims of the Baldia Town garments factory fire in Karachi, Kamal said that incident was an accident.  He said that the owner of the factory had fled abroad, and that the incident was now being exploited politically, while quoting accounts from lawyers of the victims.