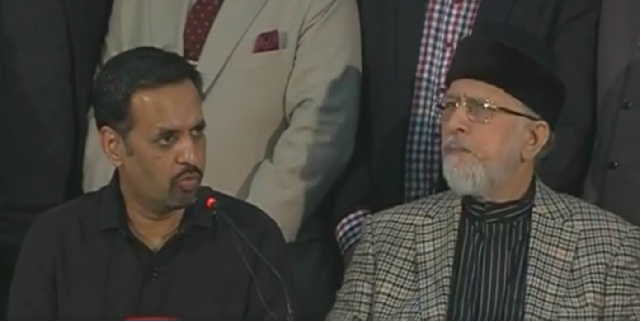 LAHORE  : Pak Sarzameen Party (PSP) became the latest political party to pledge support to Tahirul Qadri’s quest for justice in the Model Town incident in which 14 sympathisers of the Pakistan Awami Tehreek’s (PAT) party were killed.

Mustafa Kamal, the PSP chief, said that it is imperative that those responsible for the Model Town incident are brought to justice otherwise the poor, the weak and the marginalised will never be able to get their rights. He also assured Qadri and the PAT of his party’s support.

Qadri has met with major leaders including PPP Co-Chairman Asif Ali Zardari and Pakistan Tehreek-e-Insaf chief Imran Khan, both of whom agreed to stand alongside PAT.

Qadri has called for the resignation of Chief Minister Punjab Shehbaz Sharif, and the registration of criminal charges against Rana Sanaullah, Nawaz and Shehbaz Sharif.

The demands come in the wake of the Justice Ali Baqar Najafi report, made public recently. According to Qadri, the report identifies Rana Sanaullah as the main culprit, and accuses Shehbaz Sharif of lying under oath.

Don’t consider yourself rulers but servants of the people: new Islamabad police chief