ANP walk out of Sindh Assembly in protest

ANP walk out of Sindh Assembly in protest

The Awami Nation­al Party (ANP) staged a walk-out of the Sindh Assemb­ly sessio­n Monday, in protes­t over target...
Published: May 24, 2010
Tweet Email 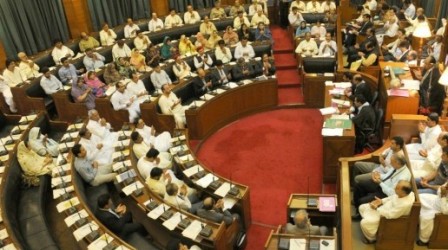 An overview of the Sindh Assembly session on Monday.

KARACHI: The Awami National Party (ANP) staged a walk-out of the Sindh Assembly session Monday, in protest over target killings of its party workers in Karachi.

The ANP demanded that the killers be brought to justice as quickly as possible. The session resumed once Sindh Senior minister Pir Mazhar ul Haq convinced the ANP members to come back.

Chief Minister Sindh, Qaim Ali Shah assured the ANP that the killers will be brought to justice. He announced that all political parties in the province have been consulted over a strategy to deal with the menace. He said the strategy will be announced soon.

The minister further added that the city quickly returned to normalcy after the spate of violence due to government’s speedy action and a policy of reconciliation.