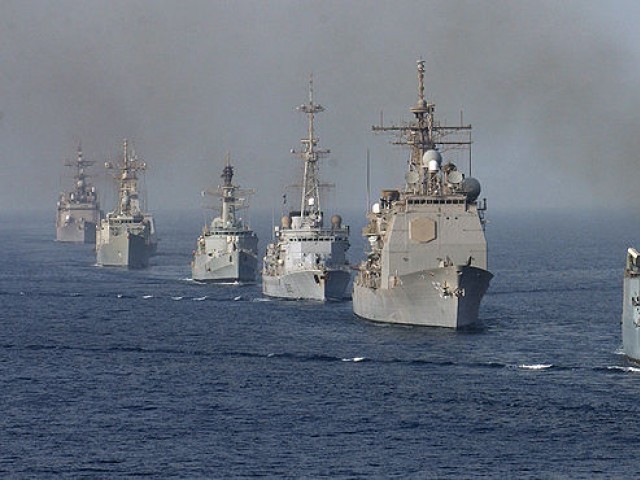 Ships assigned to Combined Task Force One Five Zero (CTF-150) assemble in a formation in the Gulf of Oman, May 6 2004. PHOTO COURTESY: http://www.navy.mil

Rear Admiral Naveed Ahmed Rizvi gave the reins of CTF-150   to Commodore Malcolm KM Wise OAM of the Royal Australian Navy in a change of command ceremony held at the Headquarters Combined Maritime Forces (CMF) in Bahrain on Thursday, according to a statement issued by Pakistan Navy.

While speaking on the occasion, Rear Admiral Rizvi, the outgoing Commander CTF-150, highlighted the threat of terrorism transcends national boundaries which requires combined response from all stakeholders.

“The CMF has proven that it provides a framework to ensure global and regional maritime security while acknowledging the individual concerns and sensitivities of member countries,” he added.

The outgoing commander went on to say that the unity and the willingness of the nations is the real strength of the coalition and this provides the Commanders of the CTFs a unique opportunity to command a rainbow of sea platforms and staff.

The ceremony was presided over by Vice Admiral John Aquilino, USN, Commander US Fifth Fleet and Commander Combined Maritime Forces. Dignitaries and military officials were also present on the occasion.