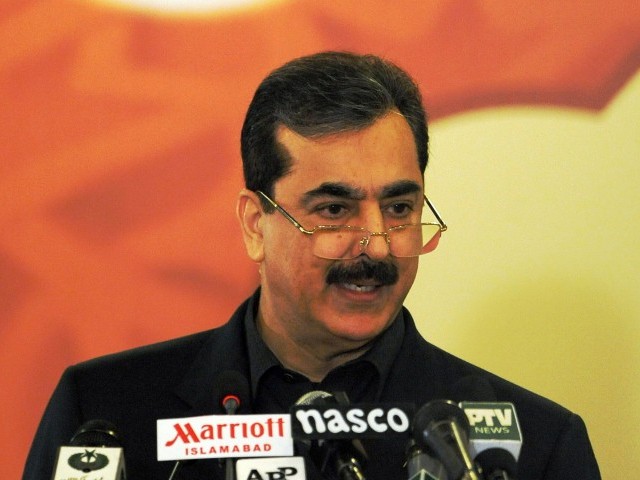 Prime Minister Yousaf Raza Gilani on Wednesday said that the Inter-Services Intelligence (ISI) and other government institutions were working with the government’s consent. PHOTO: AFP/FILE

Prime Minister Yousaf Raza Gilan on Wednesday rejected the impression that the Inter-Services Intelligence (ISI) had ventured into any project without the government’s knowledge.

He said intelligence agencies were subservient to the government and were not involved in any act that was against the national interest. “If the ISI has taken some step, it has been done with our backing. We do not want anyone to weaken our state institutions.”

The prime minister said that the government would neither compromise nor undermine the country’s interest or its integrity at any cost.

“Pakistan Peoples Party is fully responsible for Pakistan’s sovereignty and security and it would never undermine it,” Gilani told a gathering after the inauguration of an upgraded health centre on the outskirts of Islamabad.

He said the country’s relations with the US were based on mutual self-respect. “We will not go against the national interest,” he said.

Gilani said the Pakistan-US diplomatic relations had experienced ups and downs during different government tenures. However, he assured that the present democratic government would always uphold the country’s interest   come what may.

He credited the Pakistan Peoples Party (PPP) government with uniting the entire nation against extremists and terrorists, in reference to the military operation in Swat and Malakand.

The premier brushed aside fears about the safety of the country’s nuclear programme, saying there was no room for doubt.

Gilani also rejected the notion that the PPP government was not honouring the judiciary. Even in the Raymond Davis issue, the prime minister said the government’s silence was due to its respect for the courts as the matter was sub judice.

He said the government always worked towards strengthening the state institutions.

“Whether it’s the judiciary, the military or the parliament, we will not let anyone weaken the state institutions,” he said. He said some leaders were trying to mislead the nation that the prime minister would have to face contempt of court after declining the proposal of the parliamentary committee regarding the judges. “Such leaders should see now how the matter has been resolved amicably by the government,” he added.

Gilani said the people were aware of the worth of their political leaders and could now differentiate between those who tried to spread confusion and despondency. “Those leaders who are interested in coming into the government through undemocratic means should show some patience. The nation knows their worth quite well,” he said.