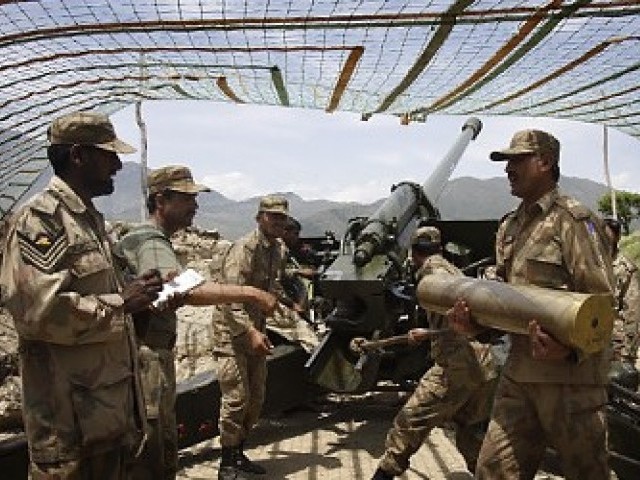 There were also unconfirmed reports from Pakistani officials that two Afghan soldiers were killed in the clash. PHOTO: FILE

Despite signs of improvement in diplomatic relations between Pakistan and Afghanistan, border guards from the two countries on Wednesday traded fire in the South Waziristan tribal district.

At least 12 Afghan National Army (ANA) troops and one soldier from the Pakistani paramilitary Frontier Corps (FC) were killed in the clash that took place in the Angoor Adda area of the district. Three FC troops and eight civilians were also wounded.

The border clash is ominous as it came at a time when Pakistan-US relations are at their lowest ebb and amid reports that Islamabad has asked Kabul to distance itself from the United States and seek new allies such as China – though the reports have subsequently been rejected by Pakistan.

Earlier this month Pakistan and Afghanistan had agreed to upgrade a joint commission to expedite the reconciliation process in an effort to restore stability to the region.

The ANA troops fired mortar shells in the Angoor Adda area without any provocation, a military statement said. One Pakistani soldier was killed and three were injured due to this “unprovoked firing” from across the border. South Waziristan borders the eastern Afghan province of Paktika.

South Waziristan Political Agent Attifur Rehman told newsmen that the Afghan troops fired around 70 mortar shells on a Pakistani border post and on the Angoor Adda bazaar. “Some missiles were also fired from across the border,” he added.

Local residents said that several small shops, selling fuel wood and coal, were destroyed in the shelling. An official told The Express Tribune that the clash broke out at 10.30 am and lasted more than two hours.

At least 12 ANA soldiers were killed and many others injured in the retaliatory fire from Pakistani troops, a source told The Express Tribune. Another source put the ANA death toll at eight.

The security commander of Paktika province Daulat Khan blamed the Pakistani troops for the incident. He told the Afghan Islamic Press (AIP) news agency that Pakistani troops resorted to “unprovoked shelling” with heavy weapons in the Shagin area of Paktika on Wednesday.

Khan claimed that seven Afghan civilians were wounded as a result of the shelling. However, no ANA soldier was killed or injured in the incident. Khan said the ANA troops fired back and the fire exchange continued for several hours. He claimed that three Pakistani troops were killed in the retaliatory fire from the Afghan troops.

Meanwhile reports said that US-led coalition troops stationed in Afghanistan also fired at a mountainous border post in the same area. Coalition troops fired at the post with heavy weapons from the Shagin area of Paktika province. As a result two Pakistani soldiers were wounded.

According to sources, Pakistani border guards responded to the “unprovoked attack”. However, there were no reports of any casualties from the coalition side.

“The newly-recruited ANA, comprising Tajik and Uzbek soldiers, has recently taken over security of border areas from coalition forces and they are responsible for these attacks,” Lt Gen (retd) Hamid Gul, a former chief of the Inter-Service Intelligence (ISI) told The Express Tribune.

With additional reporting by Sumera Khan in Islamabad