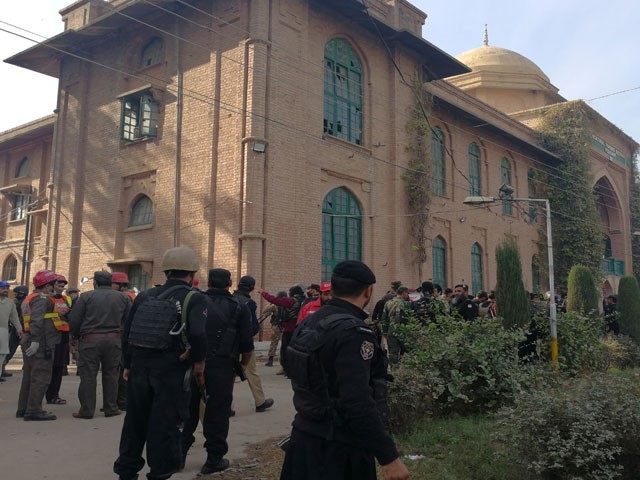 Police and rescue workers stand outside the Directorate of Agriculture Institute in Peshawar on December 1, 2017. PHOTO: REUTERS

ISLAMABAD: A Senate panel asked on Monday the Ministry of Interior to investigate how an Indian national named Anirudh Kumar Mishra could have predicted in a tweet the recent act of terrorism in Peshawar, off by just one day.

The same man also predicted that Pakistan would suffer five more such terrorist attacks till mid-February,

Expressing concerns over the fresh wave of terrorism in the country, Senator A Rehman Malik accused India of instigating acts of terrorism in Pakistan, insisting that its agency, RAW, was using Afghanistan’s soil for such nefarious activities.

He asked the Ministry of Interior to investigate and expose India’s real face at international forums.

Chairing the meeting of the Senate’s Standing Committee on Interior, he said that India was abetting and sponsoring terrorists inside Afghanistan for carrying out such acts inside Pakistan. He also urged the government to review progress of the National Action Plan (NAP) since its formulation in 2014.

The Senate’s panel passed a unanimous resolution condemning the attack on the Directorate of Agriculture’s Institute in Peshawar in which 12 lives were lost and 30 others were injured.

The panel’s chairperson also asked the ministry of interior and the Foreign Office to look into some tweets that signal the possibility of more attacks.

Senator Malik moved the resolution stating: “The Senate Standing Committee on Interior strongly condemns the painful terror attack on the Agriculture Training Institute, Peshawar wherein on December 1, 2017, 12 innocent people, including students, were martyred and 35 were injured.”

The committee also expressed condolences with the victims’ families.

It also urged the government to take up the matter with Kabul as terrorist kingpins such as Mullah Fazalullah and others were sponsoring terror inside Pakistan from Afghanistan.

The committee also called for enhancing security across the Pakistan-Afghanistan border.

It also urged the government to take up the issue of Fazalullah and other terrorists hiding inside Afghanistan with Interpol to put pressure on Afghanistan to hand over these terrorists to Pakistan.”

The panel referred the Criminal Laws (Amendment) (Protection of Rights of Transgender Persons) Bill, 2017 moved by Senator Rubina Khalid to CII, asking it to give a clear response in this regard.

The chairman of the committee asked the Chairman CII to personally attend the next meeting.

The committee also held a detailed discussion on action being taken against Turk citizens who were living in Pakistan on valid visas.

The matter was moved by Senator Muhammad Ali Khan Saif, who pointed out that Pakistan was a signatory to numerous international conventions, providing for protecting foreigners living here legally and fearing persecution in their own country.

The senator cited press reports which suggested that many Turks who had legal work permits had been deported without affording them the opportunity of a fair trial.

The Minister of State for Interior Talal Chaudhry said that only people without legal cover had been deported and no such case was in the knowledge of the interior ministry.

The Joint Secretary of the ministry said that 175 Turks had voluntarily left the country and as many as 219 were still residing in the country.

The chairman later decided to defer the matter till the next meeting, asking the ministry to provide details of trials pending in courts and also urged the government to take up the matter with the Turkish government.

The mover will also provide details of such cases.

The meeting was also briefed by the FIA on inquiries referred to the agency by the CDA against cooperative housing societies accused of selling non-available plots.

The panel’s chairman asked FIA to provide more details on violations cited in FIRs against these societies and decided to hear what the Chairman CDA had to say on this matter in the next meeting.