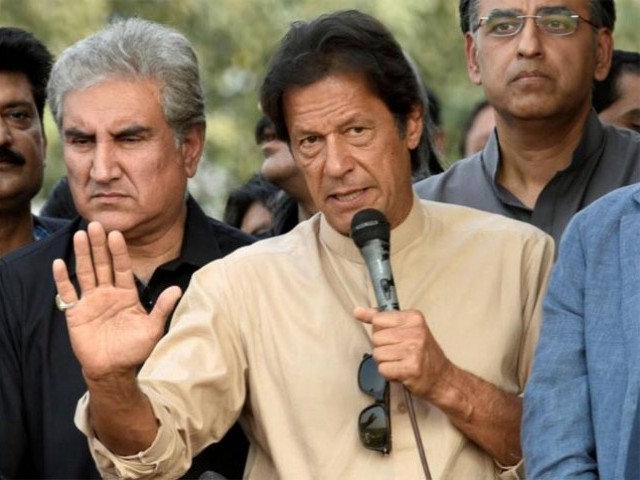 ISLAMABAD: The Pakistan Tehreek-e-Insaf (PTI) has once again approached the Election Commission of Pakistan (ECP) with the claim that its rivals Pakistan Muslim League-Nawaz (PML-N) and Pakistan Peoples Party (PPP) have been getting funds through illegal sources.

A PTI activist, Farrukh Habib, has filed two petitions through his counsel Faisal Hussain, seeking the audit of the accounts of both parties for the years 2013-15.

On October 27, the ECP had returned the PTI activist’s petitions and asked him to file them under the new election laws enacted on October 2. The commission is also hearing since 2014 a petition of a PTI dissident who has accused Imran Khan’s party of receiving funds through illegal sources.

In his petition against the PML-N, the petitioner said details of accounts submitted by the ruling party for 2013, 2014 and 2015 raised serious questions about the reliability of the audit. Under the law, every political party has to submit details of its assets and accounts for the previous year within 60 days after the start of a financial year.

The complainant claimed the audit report of PML-N funds was not at par with international standards and had been prepared by a firm lacking a quality control rating from the Institute of Chartered Accountants of Pakistan.

There were some unverifiable assets amounting to millions of rupees in the asset details the PML-N had been submitting, he said.

The petitioner said the ruling party had not mentioned the source of millions of rupees and used vague terms like “other revenues” to hide alleged illegality while providing details about accounts of its central secretariat in Islamabad. The financial statement for the secretariat did not disclose any office premises in the asset details other than PML House in F-7/3, which the PML-Q claimed as its property, he contended. The petitioner pointed out similar inconsistencies in the accounts of provincial chapters of the ruling party.

A more serious accusation is about a private limited company having an office at 766, Ramford Road, London, and owned by the PML-N. This foreign incorporated company was registered with the Registrar of Companies for England and Whales and PML-N chief Nawaz Sharif had not disclosed the firm or its purpose while filing the details of assets and accounts for his party during the past few years, the petitioner claimed.

The details of the private company’s finances cannot be accessed but information regarding its funds may be sought by the ECP to ascertain whether it is providing or collecting money prohibited under Pakistani laws for political parties. Establishing the company in the UK was a violation of the Political Parties Order and its non-disclosure exhibited mala fide on part of Sharif, the petitioner claimed.

The PTI activist also accused Sharif of using his party for money laundering. He said that in 2013 the PML-N received Rs100 million from Sharif as donation and Rs45 million was remitted back to his personal accounts before the financial year ended.

In the petition against the PPP, Habib levelled similar accusations and said that between 2009 and 2012 there was no record of any financial details of the party. The accounts for 2013 started with an opening balance from the previous years, but where this opening balance was generated from was not disclosed, raising questions that the opening fund of Rs414 million might have come from prohibited sources, he said.

Citing details about several disbursements mentioned in PPP’s accounts for 2013, 2014 and 2015, the petitioner claimed they were contradictory, inaccurate and did not show the actual financial position and source of funding.

He asked the ECP to order a scrutiny of the accounts of both the parties, withdraw their election symbols and confiscate their funds if it was proved that they had received funds from prohibited sources.