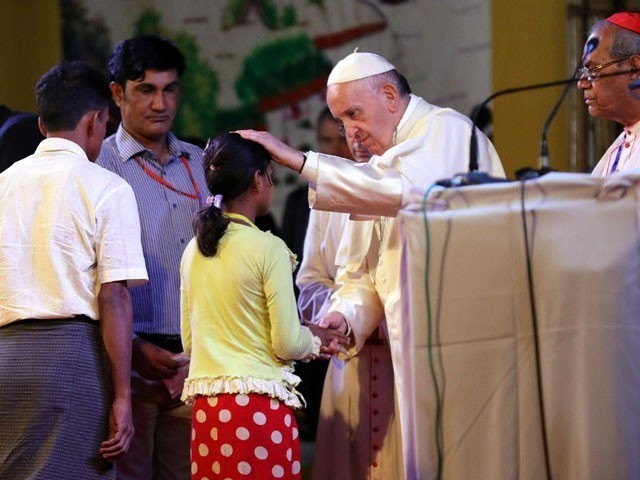 YANGON: Pope Francis’s embrace of the Rohingya during a trip to Bangladesh has sparked some angry comment on social media in Myanmar, where just days earlier he chose not to publicly air their plight.

On Friday the head of the Catholic church met a group of refugees from Myanmar’s stateless Muslim minority in the Bangladeshi capital Dhaka.

He referred to them as “Rohingya” — a term unacceptable to many in Myanmar where they are reviled as alleged “Bengali” illegal immigrants rather than as a distinct ethnic group.

During his public addresses on the previous leg of his trip in mainly Buddhist Myanmar, Francis did not refer to the group by name or directly allude to the crisis in Rakhine state, from where over 620,000 Rohingya have fled since August.

His caution initially won applause from Myanmar’s tiny Catholic minority — who feared a nationalist blowback — as well as from Buddhist hardliners, who are on the defensive after a global outcry about the treatment of the group.

A deadly attack by Rohingya militants on police posts in late August sparked a ferocious crackdown in Rakhine by the Myanmar military, which the US and UN describe as ethnic cleansing.

As he arrived back at the Vatican, the pontiff said he had taken up the Rohingya cause in private in Myanmar, also describing how he wept after meeting the group of refugees.

“I wept: I tried to do it in a way that it couldn’t be seen,” he told reporters. “They wept too.”

The comments sparked a flurry of online anger in Myanmar, a country locked off from modern communications for five decades but which now has an active social media.

“He is like a lizard whose colour has changed because of weather,” said Facebook user Aung Soe Lin of the pope’s strikingly different stances on the crisis.

“He should be a salesman or broker for using different words even though he is a religious leader,” said another Facebook user called Soe Soe.

Myanmar’s Catholic church had advised Francis not to stray into the incendiary issue of the status of the Rohingya in Myanmar, in case he worsened tensions and endangered Christians.

In his public addresses he treaded softly on the topic, urging unity, compassion and respect for all ethnic groups — but not naming the Rohingya.

“The Pope is a holy person… but he said something here (in Myanmar) and he said different in other country,” another Facebook user Ye Linn Maung posted.

“He should say the same things if he loves the truth.” Others were more sanguine about Francis’ choice of language once he had left Myanmar soil.

Maung Thway Chun, chairman of an unofficial party of nationalists called the 135 Patriots Party, applauded the pope’s decision not to name the them in Myanmar despite pressure from rights groups.

“It means he respects Myanmar people,” he said. “He even did not use the word many times in Bangladesh… I think he said it once, just to comfort human rights organisations.”