Players heartbroken as Pakistan misses out on World Jiu-Jitsu Championship

Players heartbroken as Pakistan misses out on World Jiu-Jitsu Championship 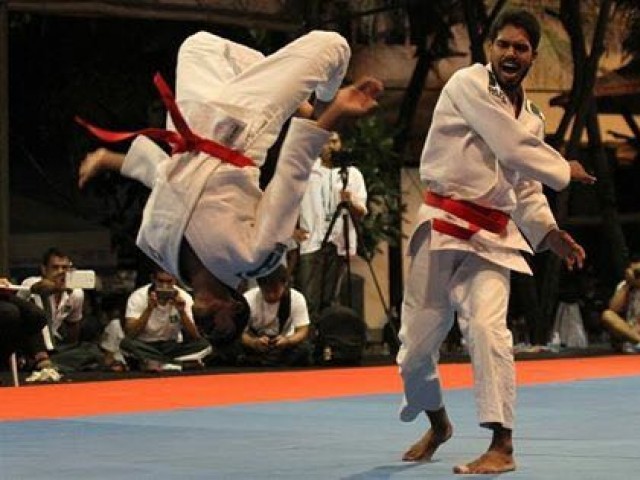 KARACHI: As Pakistan missed out on World Jiu-Jitsu Championship 2017, Muhammad Ammar, winner of silver medal in 2015’s edition, reveals that he and other players are dejected by the development.

Ammar, who also won medal for Pakistan in 2017 Asian Indoor Games, along with his partner Abu Huraira, has brought nothing but laurels for the country.

No backers for ju-jitsu dreams

The duo produced remarkable performances since their debut in the 2015 edition, but Ammar believes missing out on next year’s mega event shows lack of recognition and support from authorities even after so many achievements.

“It is beyond heartbreaking for us,” said Ammar while talking to The Express Tribune. “We had been preparing for it and gave our passports for the visas knowing that we can win more medals if we had get some kind of support from the government.”

He added: “We were really hopeful this time because both me and Huraira had won silver medals in the duo system event at the Asian Indoor Games too.  In fact the jiu-jitsu players had won the most medals out of all the sports that Pakistan competed in, but still nobody even recognised our achievement. It is disappointing and sucks all the motivation out of us. It seems genuine people cannot go too far in Pakistan.”

Ammar further went on discuss the problems athletes are facing in trying to finance their passion and making a living out of the sport professionally, but believes apathy of the Pakistan Sports Board (PSB) hinders the success of any sport besides cricket.

“I’ve done all that I could, I’ve won all sorts of medals both on Asian and World level too,” he said. “I’ve been into this since 2009, but how long can we go like this if we don’t see any change? The federations also have limited resources, it is like we are on our own and one day if we quit, no one would care — despite winning so many medals for this country.”