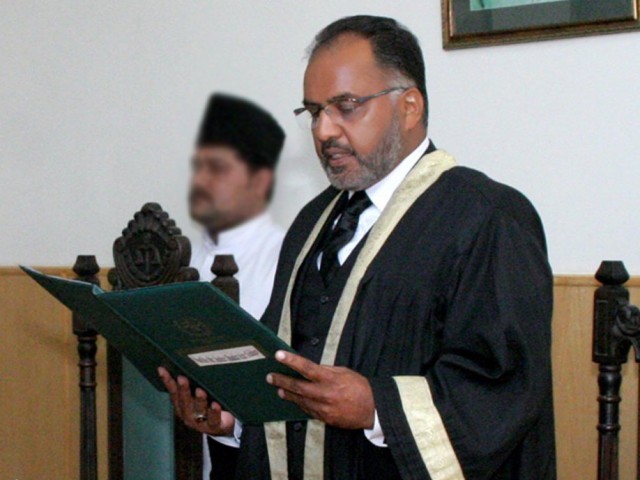 ISLAMABAD: The Islamabad High Court (IHC) has objected to the terms of agreement between the federal government and the Faizabad sit-in leaders, besides questioning the role of the armed forces as mediator in the episode.

IHC Justice Shaukat Aziz Siddiqui, while hearing a case regarding the protest on Monday, said an acknowledgement in the agreement indicated that the army chief, instead of following the orders of the chief executive, became a mediator.

The government conceded to the protesters’ demands in the agreement reached late on Sunday night after the 20-day protest virtually paralysed the twin cities.

“Prima facie, role assumed by the top leadership of army is besides the Constitution and law of land. Armed forces, being part of the executive of the country, cannot travel beyond its mandate bestowed upon it by the organic law of the country i.e. Constitution of Islamic Republic of Pakistan,” Justice Siddiqui observed and directed the government to satisfy the court about the constitutional role of the armed forces.

Justice Siddiqui questioned why an army officer was playing the role of a mediator. He added that an impression is being given that the military is the panacea for all ills. He also said that if an army officer is passionate about politics, he should retire and then play politics.

At the beginning of the hearing, the interior minister told the court that the government and the protesters holding the sit-in at Faizabad Interchange on the call of the Tehreek-e-Labbaik had reached an agreement.

“Besides a number of serious objections on the terms of agreement, most alarming is that Major General Faiz Hameed put signature as one through whom the agreement was arrived at. It is also very strange that efforts of General Qamar Javed Bajwa, Chief of Army Staff, have been acknowledged,” the court observed.

“This agreement is the result of efforts of General Qamar Javed Bajwa and his team,” Justice Siddiqui quoted from the agreement.

The IHC observed that it was a matter of record that most abusive and filthy language was used against honourable judges of the Supreme Court, but the government and the arbitrator did not bother to persuade the leadership of the group to even tender an apology in this regard.

The IHC asked the attorney general to appear in person to assist the court on this point and the Islamabad chief commissioner to submit his report about the earlier clearance operation and reasons of its failure.

The court sought a report from General Anwar Ali, the Intelligence Bureau (IB) Joint Director, on wherefrom  the participants of the sit-in had brought guns to fire tear gas shells and masks to protect themselves, in addition to grenades, weapons and other instruments.

The IHC also instructed the IB official to submit a report showing reasons of the failure of Saturday’s operation and aid provided to the protesters when Islamabad police had almost cleared the traffic interchange.

In addition, the court ordered him to submit a report about an audio clip viral on the social media, wherein some high ranked officer appeared to be explaining the army’s point of view on the sit-in to one Saqib.

The court clarified that questions raised by it should not be used as an excuse to disperse the protesters. The order to clear Faizabad Interchange was still in field and if the protesters were bent upon carrying on their sit-in, the government and the ICT administration were required to persuade them to shift it to the Parade Ground, it said, adding that Sections 4 and 5 of the Anti-Terrorism Act about calling the armed forces and civil armed forces could be applied if the alternative was required.

The hearing of the case was adjourned till December 4.