Protests cause residents to remain at home

Protests cause residents to remain at home

No violen­t incide­nts report­ed as market­s across Sindh remain closed on Sunday­
By Our Correspondents
Published: November 27, 2017
Tweet Email 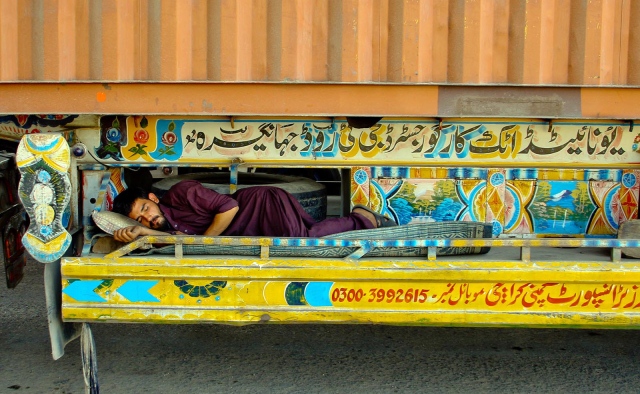 A labourer naps beneath a truck. The Super Highway was blocked by protesters on Sunday, causing a massive traffic jam. PHOTO: INP

KARACHI/HYDERABAD: Karachi slumbered on Sunday as supporters of Tehreek-e-Labbaik continued to stage sit-ins at over a dozen locations in the city for the second consecutive day. The protests in the aftermath of the Faizabad incident caused fear to course through residents’ veins and many Karachiites opted to stay home.

No violent incident or clash between the police and protesters was reported.

The central procession at Numaish Chowrangi entered its eight day. Roads leading to Governor House were sealed by placing containers along the way to avert the possibility of demonstrators marching towards the governor’s official residence. A number of Pakistan Muslim League – Nawaz leaders have come under fire in recent days.

The city’s streets looked deserted on Sunday as all commercial and business activities halted for the second day. Along with the main markets, numerous small markets and shops also remained closed due to the uncertainty that prevailed in Karachi after the series of sit-ins.

A labourer naps beneath a truck. The Super Highway was blocked by protesters on Sunday, causing a massive traffic jam. PHOTO: INP

Police officials said that though the protesters continued to stage sit-ins in various parts of the city, the situation has returned to normal. “The situation is much better in my [jurisdiction],” said District Malir SSP Rao Anwar. “The National Highway, Northern Bypass, Lyari Expressway and Sharae Faisal are all open for vehicular traffic,” he said. SSP Anwar said that the police have obtained remand of 19 protesters who were arrested by law enforcers from Star Gate on Saturday for attacking the police and disrupting the law and order situation. However, he said no more arrests had been made in this regard.

After negotiations between the protesters and law enforcers, the route leading from Tower to II Chundrigar Road was cleared, following which traffic resumed between Saddar and II Chundrigar Road while the flow of traffic on Sharae Faisal remained normal after it was opened for traffic while alternative routes were provided by the traffic police for heavy traffic on the Super Highway. 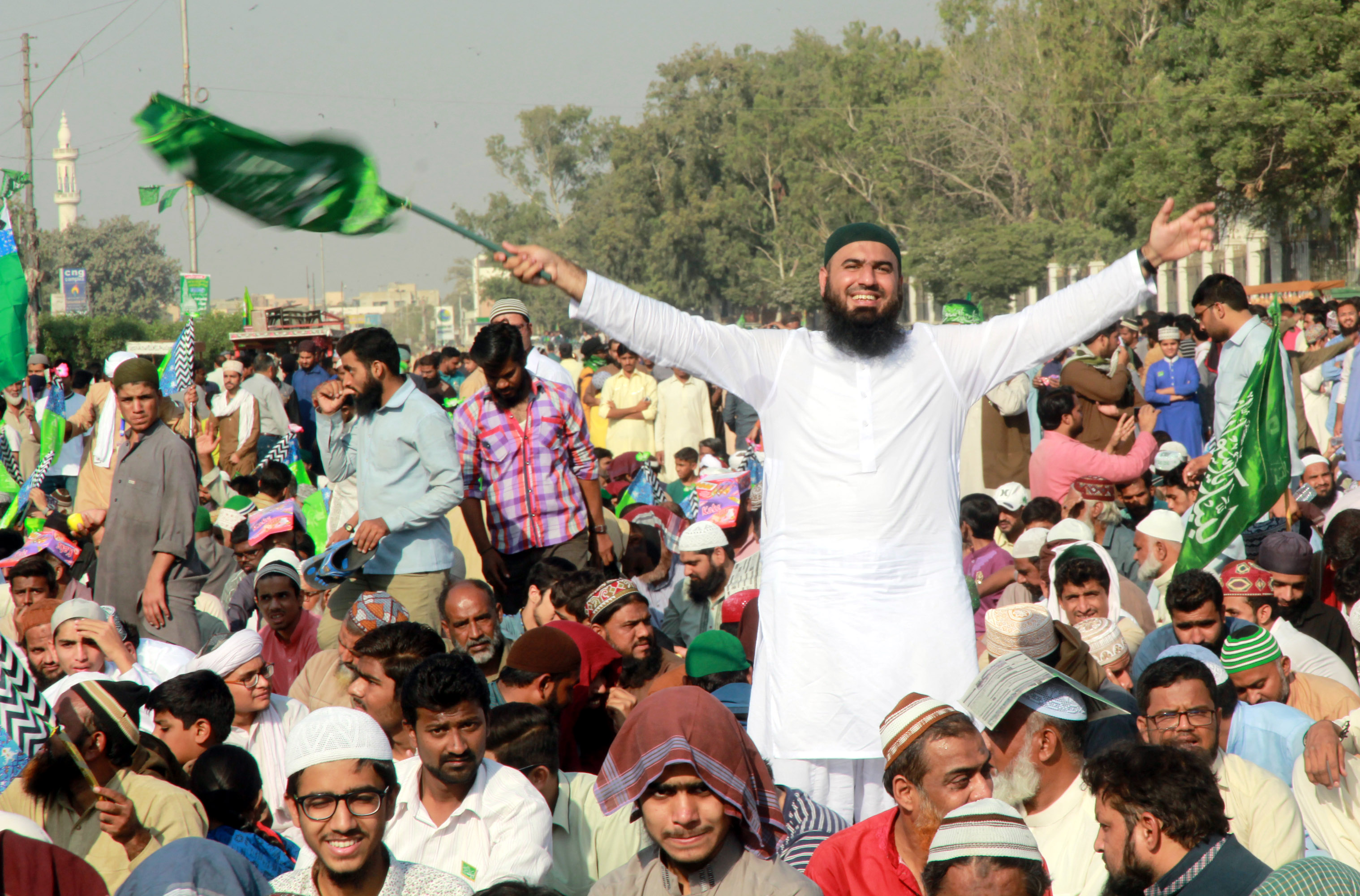 There were no incidents of violence reported on Sunday. PHOTO: ATHAR KHAN/EXPRESS

The situation in Nursery area remained calm on the Sunday, compared to the chaos of Saturday. “They [the protesters] are sitting at various locations in my [jurisdiction] like Numaish Chowrangi, Teen Hatti, Jamshed Road, Allah Wali Chowrangi and Hassan Square but they are just sitting and blocking the roads by setting out tyres. They are not violent today,” explained Jamshed Division SP Dr Rizwan Ahmed Khan. “But it is possible that they could turn violent today [Monday] but we are ready to deal with them if they turn violent,” he assured.

On Saturday, some 32 protesters were wounded in different incidents across Karachi, particularly at Star Gate and Nursery after they clashed with the police.

The strike called in reaction to the police crackdown against protesters at the Faizabad interchange in Islamabad paralysed life in many districts of Sindh on Sunday. Most markets remained shut – unlike in Karachi, markets in the rest of Sindh remain open on Sundays – while thin traffic moved on the highways and in cities. 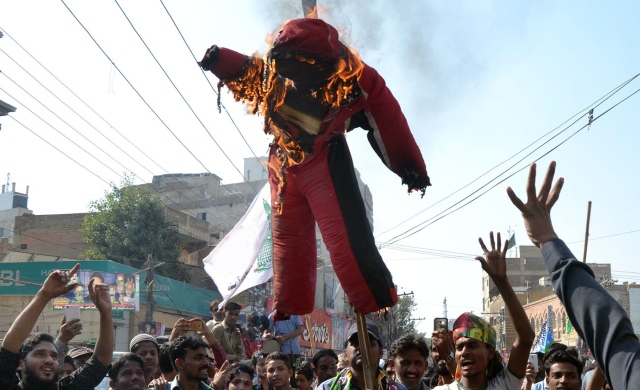 Passengers at railway stations complained about the delayed arrival and departure of trains. A shutter down strike, called by Tehreek Labbaik Ya Rasool Allah and political and religious groups supporting the party, was observed in many districts of Hyderabad, Mirpurkhas and Nawabshah divisions. The protests and sit-in demonstrations continued for second day.

In Hyderabad, where the sit-in at Haider Chowk in the downtown area continued since Saturday, protesters burnt effigies of former prime minister Nawaz Sharif and federal law minister Zahid Hamid.

“The government has been hoisted by its own petard,” said Sahibzada Abul Khair Muhammad Zubair, chief of the Milli Yakjahti Council and head of Jamaat-i-Ulema-i-Pakistan. “Instead of accepting the protesters’ justified demands, the government used brute force to quell them.”

He condemned what he described as ‘an act of state terrorism on peaceful protesters’. “The interior minister [Dr Ahsan Iqbal] is conspiring to turn the whole country into a battlefield.” Zubair asked the government to negotiate with the protesters and accept their demand. “They should fear the day when the whole PML-N will be asking mujhe kyun nikala.”

The entry and exit points of Hyderabad as well as important squares and intersections were manned by police and Rangers. Contingents of police and Rangers surrounded Haider Chowk area where thousands gathered to vent their anger.

Local residents felt confined to their homes and were troubled by the commotion. “We have been living in the fear that if they started to set properties on fire, our area will be the first,” a resident of a four-storey building at the chowk, who requested anonymity, feared.

Sindh’s residents come out in support of Faizabad protesters

Tehreek Labbaik Ya Rasool Allah’s Sufi Saleem Abbassi said the sit-in will not stop until they received directions from Khadim Hussain Rizvi, the group’s chief leading the protest in Islamabad.

Rallies, sit-in protests, demonstrations and press conferences by different religious groups were also held in other districts of the three divisions. In Benazirabad, Badin, Sanghar, Jamshoro, Tando Allahyar, Umerkot and Tharparkar sit-in protests were organised. In Mirpurkhas a rally was held from Jamia Masjid and passed through various localities.