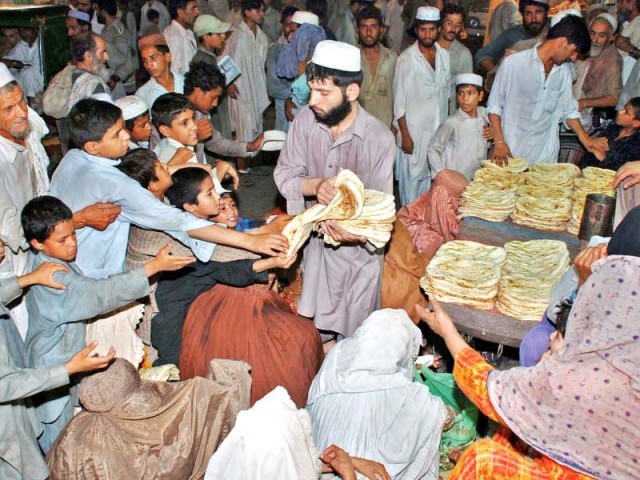 A beggar woman sits with her children, while others get free food. PHOTO: IQBAL HAIDER/EXPRESS

PESHAWAR: While the Peshawar district administration has banned beggars in the city, some critics believe that this is not the way to resolve the issue.

The deputy commissioner’s office recently issued a notification, a copy of which is available with The Express Tribune, which said that an ‘increase’ in the number of beggars on the streets of the city as threat to the peace of the metropolis, had imposed Section 144 of the Criminal Procedure Code, banning beggars.

“There is apprehension of breach [due to increase number of beggars in the city] of peace, public tranquility and uncertainty among the public general public of the area so imposition of Section 144 to ban beggars is necessary to maintain peace and avoid any untoward incident,” the notification quoted Deputy Commissioner (DC) Islamzeb as saying.

The notification further added that the ban hopes to put a stop to a further increase in the beggar population of the city without mentioning any steps which will be taken against existing beggars. A research study conducted in 2011 suggested that some begging was actually part of ‘organised crime’ in the country. The study estimates that there are around 25 million beggars roaming the streets of Pakistan, despite the fact that begging has been banned in the country since 1958.

The study divided the beggars into three categories including need-based, convenience or preference and organised criminal beggars.

The same study suggested that some beggars also engage in other activates such as sex work and selling drugs along with.

However, some argue that merely locking the beggars in jails will not solve the problem. 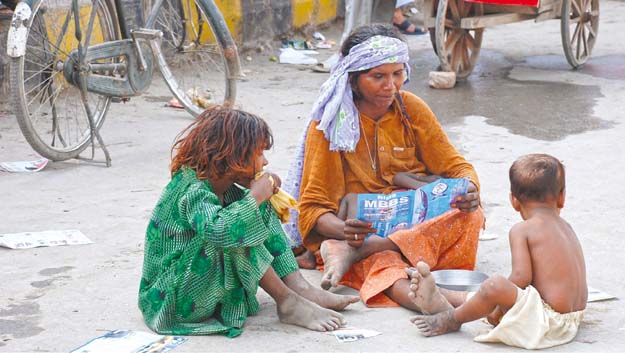 Qamar Naseem, a human rights defender who heads the Blue Vein Organization — working for the promotion of human rights — supports some of the suggestions of the study.

Naseem told The Express Tribune that since most of the beggars’ hailed from financially downtrodden backgrounds, banning them could actually force them to earn money in other ways such as street crimes, prostitution or other illegal activities such as drugs. He suggested that instead of banning them, beggars should be provided with an alternative means of income to reduce or control their numbers.

“The government needs to educate them [beggars] and create job opportunities for them and they would then easily quit begging,” Naseem suggests, noting that the government should particularly focus on children begging.

Pointing out that poverty was the root cause of beggars, he said that many people who work are not even paid the minimum wage of Rs14,000 per month. Similarly, a 2011 survey by the International Labor Organization(ILO) found that most people involved in begging do so to survive after exhausting all other economic alternatives. There is only a fraction which is forced into begging by criminal groups.

“Around 34 per cent of beggars interviewed from the survey are working under organised begging operations, in which beggar masters are involved,” the survey stated.

Naseem thinks that beggars who fall prey to these organised begging rings belong to the poorest of poor and cannot support their families and find themselves trapped in the vicious cycle of begging.

“Again it is the responsibility of the state to track down the begging masters [and take action against them],” he said. However, he pointed out that even if a third of all beggars were part of an organised begging racket, the remaining 67 per cent is quite high and suggests that they have been begging to ameliorate their financial condition.

“The society is also as responsible as the state for begging in the country and the rich should support the poor through zakat and charities, which is one of the basic principles of Islam,” Naseem concluded.