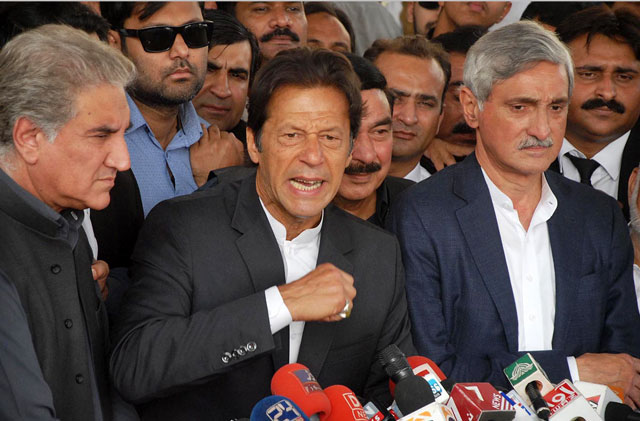 ISLAMABAD: Pakistan Tehreek-e-Insaf (PTI) chairman Imran Khan and secretary general Jahangir Tareen did not disclose ownership of an offshore company and a trust respectively, which should be considered assets, according to additional documents submitted to the Supreme Court in a disqualification case against the two leaders.

The documents of response, submitted on Tuesday by PML-N leader Hanif Abbasi, carry definitions of trust and beneficiaries.

A three-member bench of the top court, headed by Chief Justice Saqib Nisar and comprising Justice Faisal Arab and Justice Umar Ata Bandial, had reserved judgment in the case against Khan and Tareen on Nov 15.

While closing the hearing, the court had told both counsels that they could submit additional documents in the case. The court had also made it clear that a decision should not be expected anytime soon.

In the documents of response he submitted, Abbasi referred to Black’s Law Dictionary, stating that a trust should be considered an asset. He also differentiated between a fixed trust and a bare trust.

Quoting law firm Pearce and Hudson, the response argues that a trust can be a bare trust where a trustee holds the property in trust for a single beneficiary while the trustee acts under the instructions of the beneficiary. Unlike a bare trust, there can also be a fixed trust for more than one beneficiary and “the case of Imran Khan Niazi involves a bare trust.

The response from Abbasi also argues that there is also a concept of discretionary trust where the beneficiary has an interest in the trust but there is no commitment on the part of the trustee to confer on him the benefit of any defined property.

“It is within the discretion of the trustee as to which beneficiaries shall have the benefit of the trust property,” it states, adding that Tareen’s case involves a discretionary trust.

“Nevertheless, a beneficiary under a discretionary trust has an ‘interest’ to be considered as a potential recipient of benefit under the trust and a right to have his interest protected by the court of equity,” the response argues.

“The whole class of beneficial beneficiaries, under a discretionary trust, can call upon the trustee to surrender the property according to the instructions of the beneficiaries.”

The response submits that anything that can be disposed of for value is, by definition, an asset.

“Therefore, in the cases of Khan and Tareen, their interest in the trust property was in the nature of a proprietary interest that could be disposed of, and constituted as an asset,” the response concludes.
Tareen’s counsel Sikander Bashir Mohmand has not yet submitted the additional replies he suggested he would in the last hearing.

Govt may opt for ‘option b’ to disperse protesters