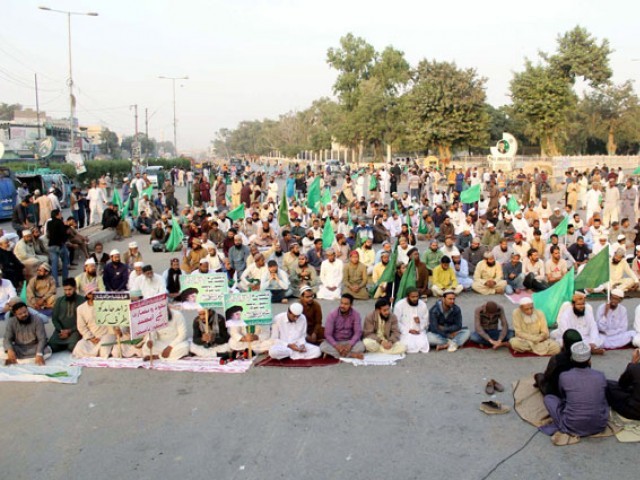 The Tehreek-e-Labbaik, a religious group that has blocked the federal capital’s Faizabad Interchange for the last two weeks, also shut down Karachi’s Numaish Chowrangi on Saturday, causing massive gridlocks on the city’s major roads.

The protest has been under way for several hours, blocking to access to MA Jinnah Road, Express News reported.

The blockade has caused traffic jams in Saddar and Gurumandir and other surrounding areas. Commuters are stuck in traffic on major thoroughfares of the city including MA Jinnah Road, Shahrah-e-Quaideen, Khalid bin Walid Road, Tariq Road and Kashmir Road.

Around 2,000 protesters at the Faizabad Interchange in Islamabad are demanding the resignation of Law Minister Zahid Hamid over a hastily-abandoned amendment to the Prophet-hood Declaration Clause in the Electoral Reforms Bill 2017.

The Islamabad administration told the protesters on Friday to end their sit-in by 10am on Saturday otherwise a joint operation by Rangers, Frontier Constabulary and police would be carried out to disperse them.

Mufti Muneeb warns govt against cracking down on Faizabad protesters

However, after the deadline expired earlier today, Interior Minister Ahsan Iqbal postponed the operation by another 24 hours. In a bid to persuade the protesters to end their sit-in peacefully, Iqbal also appealed to religious leaders to help the government resolve the issue.

A government team started negotiations with the protesters at the residence of Senatar Zafarul Haq on Saturday.

The Election (Amendment) Elections Bill 2017 was passed both by the National Assembly and Senate, bringing the Khatm-e-Nabuwat clause back to its original form.