Local manufa­cturer­s say they can delive­r a simila­r produc­t at one-fifth of the price within three months.
By Salman Siddiqui
Published: April 25, 2011
Tweet Email 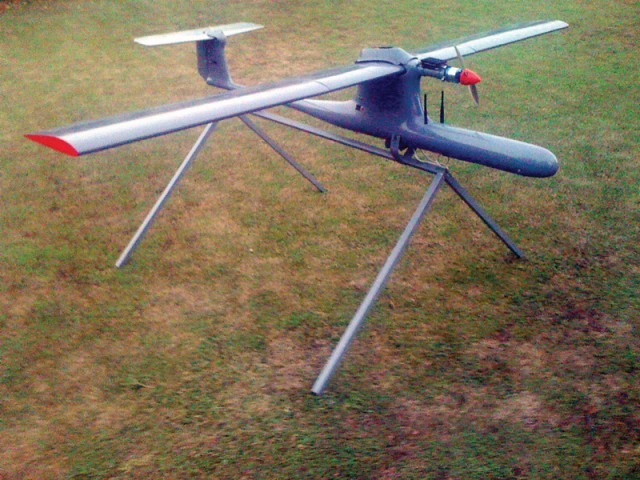 The technology for the 85 mini ‘Raven’ drones being offered by the US has not only been available in Pakistan for years, localmr drone manufacturers say they can build an equally potent, if not a more powerful version, at just  a fifth of the price quoted by US manufacturers.

Sources within the military and local drone manufacturing industry say that at least 11 corps of the Pakistan Army are set to receive a system each, comprising six Raven aircraft and one ground station.

While officials are tight-lipped about the exact cost and model of the short-range unmanned aerial vehicle (UAV) manufactured by the US-based AeroVironment Inc, the cost of each system is estimated to be between $200,000 and $275,000. The funds for their procurement are expected to come from the US government’s foreign military sales’ provisions for security assistance and aid.

ISPR spokesperson Major-General Athar Abbas however says the deal has not been formalised yet.

“We are yet to receive a formal proposal from the US regarding the Raven drone. So until we receive that I won’t be able to give a comment,” he said.

Meanwhile, the Pakistan Army, which had been pushing for an armed drone from the US, is reportedly irked that not only have their pleas for a Predator-like armed drone been shot down, negotiations for 12 long-range reconnaissance Shadow drones that were offered last year have also hit a wall.

Sources within the military say that although negotiations for the Shadow reconnaissance drone are still going on, they are unhappy at the astronomical price tag (estimated at more than $20 million) and a delivery timeline of 2014.

“Who knows at what stage the war on terror will be in 2014,” an official privy to the negotiations said.

Raja Sabri Khan chief executive of Integrated Dynamics, a private company based in Karachi, called the Raven ‘a toy’ that was developed 15 years ago.

He said one has to log on to YouTube to see the same product was being used by the US Marines as a toy when hanging out at the beach.

Khan, an MIT graduate whose drones are being exported the world over, said his company already has a product called Rover that far exceeds the capability of Raven at just one-third of the price.

A system of six Rover UAVs, including the controlling station, would cost about $65,000, he said.

“There are at least two to three companies in Pakistan who, if asked to develop something like the Raven at one-third of the cost, could have delivered the entire order within just three months,” he said.

East West Infiniti Private Ltd (EWI) managing director Dr Haroon Qureshi from Islamabad also dismissed the Raven drone offer from the US as ‘a public relations exercise’ designed to give a false impression to the military and public in Pakistan that the Americans are offering sophisticated technology.

He said Ravens are useful for short term missions but have little tactical value.

Given their fragility and high damage rate, the military will be spending huge sums of money on acquiring parts if it opts for the Raven, he added.

Ahmed Rehan, the Lahore-based CEO of a private company Technocrafts, has been in the business of manufacturing reconnaissance and target drones since 1994. He has been exporting his products to the Middle Eastern market, including Saudi Arabia.

“I have been trying to sell my company’s Condor mini drone to the military, which is more powerful than the American Raven, for the last three years, but every time I’ve hit a dead end,” Rehan said, adding his product is available at just one-fifth of the cost of Raven.

Despite the fact that he had met all requirements of the military for the mini drone, including versions with handheld or vehicle-mounted launch and parachute landing, he said he still hasn’t been given the go ahead. “I’m hoping for a miracle now,” he said.

Territorial infringement: UN may be approached to halt drone strikes