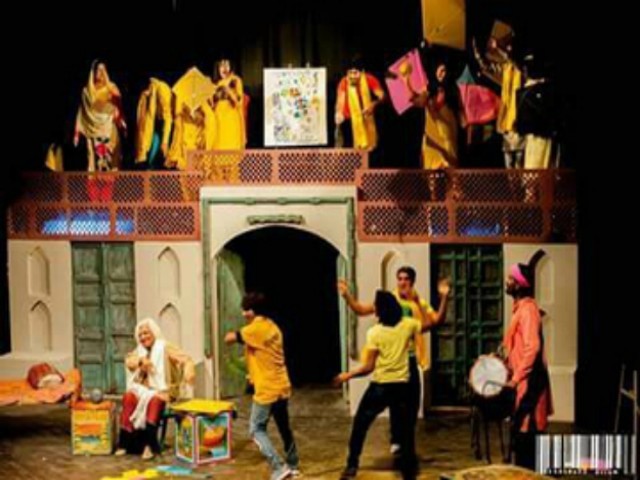 LAHORE: The Faiz Ahmad Faiz Festival, commonly known as the Faiz Mela, will hold its inauguration ceremony in Lahore today where many local artists will also be performing. The festival is also expected to attract a large crowd from all parts of the society as the organisers advertised the event all across the city. A special attraction for the attendees was the presence of Indian film personalities but due to a border clash between the countries, no Indian celebrities would be attending the event.

Ajoka theatre will perform a special show of the cultural play Lo Phir Basant Aee on the opening day of the Faiz Ahmad Faiz International Festival at Alhamra Art Centre today. The play is based on the traditional spring festival of Basant and celebrates the rich and dynamic cultural activities linked to it.

Directed by Madeeha Gohar, Lo Phir Basant Aee is story of a kite-maker and his family and how they’re rendered jobless due to the ban on Basant. The play portrays the impact of extremism and terrorism on everyday lives of the people while addressing issues such as censorship on text books, moral policing at campuses by vigilantes belonging to religious extremist groups and the portrayal of arts as un-Islamic.

The cast of the play includes Arshad Durrani, Samina Butt, Usman Raaj, Nayab Faiza, Sohail Tariq and others. The performance is being organised in collaboration with Lahore Arts Council and Faiz Foundation.

“Similar to Faiza, Ajoka has also raised its voice for serious issues faced by the society. Ajoka believes in celebrating the rich cultural traditions, norms and festivals and will always keep playing an active role in restoration of culture of the society. The play is a delightful satire which entertains the audience through music and humour but also raises some serious issues,” said Ajoka executive director Shahid Nadeem.

Furthermore, no Indian showbiz personality is willing to participate at the festival. Previously, many renowned Indian personalities like Madhur Bhandarkar, Om Puri, Naseeruddin Shah and other literary and theatre personalities regularly visited Pakistan to attend the Faiz Ahmad Faiz Festival. However, due to the tension between both the countries, Indian actors will not be attending the festival anymore. Fans are disappointed as many film screenings and literary events won’t be held at the festival anymore because of the absence of Indian guests.

Pakistani artists and theater groups’ performances were also stopped in India by extremist groups in the country. Pakistani singers and artists who were working for Bollywood films were also banned, after which Pakistani cinemas pulled off Bollywood movies from the screens. Once matters had cooled down, the Bollywood films were in the theatre. This whole state of affairs disturbed the Faiz Mela and none of the Indian personalities agreed to attend the event.

“We are expecting that maximum guests and public will attend the festival this year. No Indian film personality is coming this year except a writer, Paran Neval who will be launching his book. We are hopeful that in coming year we will be able to invite Indian guests again and renowned film actor, Naseeruddin Shah has already confirmed his presence,” said Muniza Hashmi, daughter of Faiz Ahmad Faiz.

The festival kicks off at Alhamra Hall, Mall Road today and will be held till November 19.