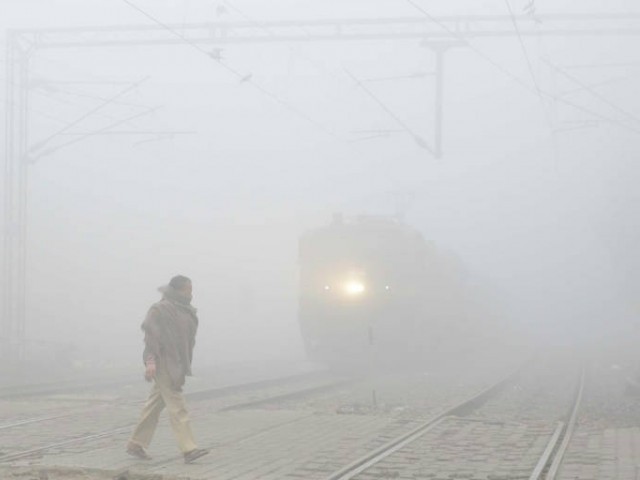 ISLAMABAD: The toxic smog that has covered parts of the country for weeks has exposed official torpor over rampant pollution that has killed thousands more people that have died in years of militancy.

The polluted air that has lingered in Islamabad in recent days was finally dispelled by rain this week, bringing the surrounding Margalla Hills into view once again.

In Lahore, where the situation was most critical, the level of PM2.5 – microscopic particles that lodge deep in the lungs – had dropped to 159 Wednesday from more than 1,000 during the pollution spike, according to Pakistan Air Quality, a citizen-driven monitoring initiative.

But what looks good for Pakistan is still very bad: 159 is six times higher than the World Health Organisation’s (WHO) safe limit.

“Question is, can a change from #Hazardous to Very #Unhealthy be called an improvement?” tweeted PakistanAirQuality.

“Fine #particulate matter with a diameter of less than 2.5 micrometres (PM2.5) is the chief #hazard because it is small enough to penetrate deep into human airways and lungs.”

Pakistan is already ranked third in the world – behind China and India – for the number of deaths caused by pollution, with 125,000 people killed annually, according to one measure by the Institute for Health Metrics and Evaluation, a research institute founded by the Gates Foundation.

The figure is well beyond the estimated 60,000 people who have died in militancy-wracked years-long battle against extremism.

“I don’t want to downplay the risk of militant extremism, but we must understand that our citizens are more vulnerable to diseases in the air than to armed terrorists on the ground,” wrote Pakistan People’s Part senator Sherry Rehman in The Express Tribune newspaper this week. “We must act. And we must act now.”

Yet the government provides almost no reliable data on pollution, making it difficult to say with any certainty why the smog has become so pervasive, particularly in the last two years, much less tackle its causes.

Obvious suspects include unchecked industrial emissions, millions of poorly maintained vehicles, and a complete lack of waste management, with tonnes of rubbish often burned in the streets.
These factors are aggravated by the annual post-harvest burning of crop stubble, blamed for fuelling the recent pollution crisis across South Asia.

As the smog peaked in recent weeks, roughly 1,000 new patients were treated each day for respiratory issues in Punjab’s nine public hospitals, health ministry officials have said. But even as under-resourced medical centres struggle to cope, local official’s reaction is lethargy.

“It is a matter of emergency but the officials concerned did nothing except taking tea in their offices,” said Chief Justice of the Lahore High Court Syed Mansoor Ali Shah.

He spoke on Monday during an emergency hearing in which an opposition party accused the provincial government in Punjab of failing to control the smog. Provincial officials had delayed school start times and shut down some of the worst polluting companies, and said they had also ordered a temporary halt to crop burning.

But Shah said in court it was not enough, adding: “Why didn’t you issue a red alert on smog since you know it’s injurious to the health of pregnant women, elderly people and heart patients especially?”

Accusing environment officials of lying to the court, he ordered them to make pollution data available to the public.

Unlike Beijing, which is cracking down on pollution, and New Delhi, which at least monitors its air and issues warnings to its citizens, local authorities “haven’t woken up yet”, said Abid Omar, the entrepreneur behind PakistanAirQuality. “Environment happens to be at the bottom of the list.”

Yet “Pakistan is extremely environmentally vulnerable,” warned environment lawyer and activist Ahmad Rafay Alam. He called on the United Nations Environment Programme (UNEP) to consider declaring Pakistan an ’emergency’ and setting up an office in Lahore.

Mideast, not India, is to blame for Punjab smog

The WHO representative for Pakistan, Mohammad Assai, said he hoped the situation would start to improve as “more awareness” spreads.

Yet even as citizens breathed a little easier on Wednesday, residents of Punjab complained that the province’s infamous brick kilns were belching smoke into the atmosphere once more. “Many are still running,” one farmer told AFP.