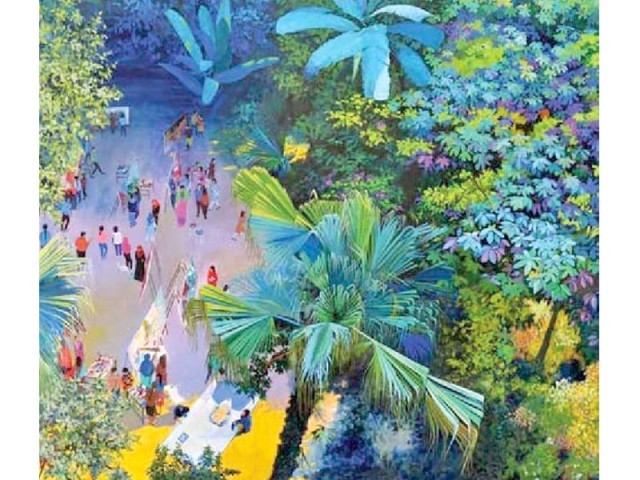 LAHORE: A solo show of 25 artworks by Rukhe Neelofer is underway at Ejaz Art Gallery.

Titled ‘Can Spring be Far Behind’, the show is a collection of art works displaying urban flora and fauna, which is very much a part of our daily lives as it makes up urban sceneries.

Use of vibrant and multiple shades of green appear to be the dominant theme of Neeflors’s recent artworks, serving as a refreshing sight for viewers. According to the artist, her initial portrayal of women evolved over time and she recently found herself focusing more on nature.

Neelofer believes this to be a reaction in terms of the deteriorating sociopolitical conditions in the country.

“At times, it seems as if all one can see on electronic media or newspapers are the bodies of innocent children, women and men. In an environment that is prevalently negative and I avoid focusing on the human form,” Neelofer explains.

“I need to paint beautiful and serene subjects, not only for my sake but also for my audience,” she says. “Nature is not only a symbol of freedom and hope for me, but also an exotic escape from the mundane,” she said

Having a keen understanding and appreciation of her country’s rich cultural heritage, the powerful and emotive works by Neelofer also include the certain traditional and cultural elements juxtaposed with the local greenery.

According to Neelofer, she mostly uses a bird’s eye view in her paintings. “Not only do I find it more challenging, but it also reflects how I like to look at life,” she said. 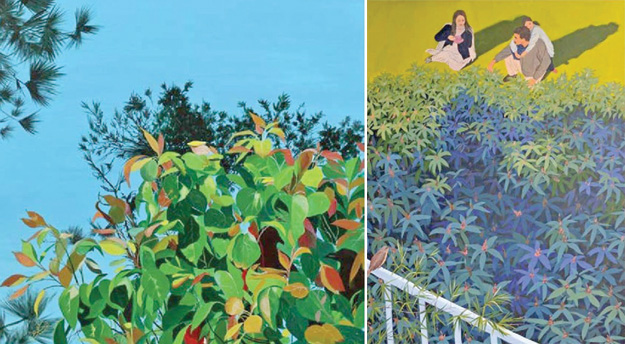 She said an aerial perspective somehow makes it easier for her to understand existence.

According to Neelofer, she enjoys painting detailed motifs and strives to make her work expressive and visually interesting by balancing intricate details with flat areas.

Speaking about her techniques and choice of medium, Neelofer said in the early 1990s, she changed her medium from oils to tempera and then gouache, realising that the dominant medium for painting in Asia, and particularly in the subcontinent, was water based.

“However, I found these mediums hard to preserve and discovered medium-viscosity acrylics which suited me perfectly,” she said.

“A change in medium brought about a subsequent change in style as well. Though my subject matter is traditional, the treatment is contemporary,” Neelofer added. The exhibition will continue till November 17.

Rukhe Neelofer Zaidi has extensive teaching experience at both the university and school level. She has exhibited her paintings in Pakistan and abroad. From 2007 onwards, she worked in many different countries, including India, Italy, Turkey, USA, Norway and Japan, in different artists’ residencies. Her first experience of working internationally was at Montserrat College of Art, USA where she was invited as a visiting artist/lecturer in 2004.