Painting Peshawar in ‘The Golden Light’

Painting Peshawar in ‘The Golden Light’ 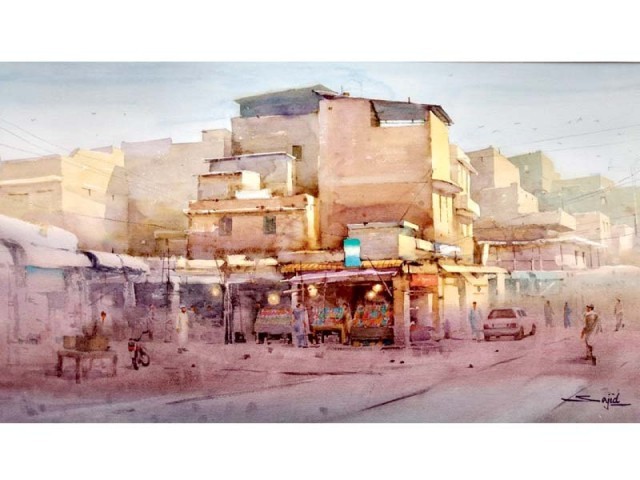 PESHAWAR: Whilst the artist community considers watercolours painting to be on a lower rung than the more technically challenging works in oil or the acrylic medium, one watercolourist from Peshawar has managed to earn international plaudits for the country

Ali Sajid, who is known for preserving the city’s heritage on paper, has earned one of the world’s highest honours for creative endeavours, winning an international watercolour painting contest held in Dubai recently.

Organised by International Watercolour Society (IWS), Sajid’s painting called ‘The Golden Light’, a picturesque scene of the bustling historical Piple Mandi in Peshawar was declared as the best from amongst the works of 500 artists from 50 different countries.

Sajid has been using watercolours for over a decade since 2004 to capture the hues, diversity and the historical architecture of the city.

Though he works in all mediums and subjects, his urban sketches and watercolour paintings of the decaying wooden architecture of the old city which captivate him.

Odd then that he chooses to capture a scene of decaying history on a medium which is viewed as equally decaying.

Sajid, though, aims to keep these scenes places, at least through his paintings.

His love for the urban landscape also led him to become a part of the urban sketchers network in Tokyo, urban Sketchers of Singapore and also a member of the of international watercolour society.

The 36-year-old water colourist explained that he aims is to encourage people to reflect upon themselves, the historical architecture and the rich cultural values around them through his art.

For Sajid, the canvas has a purpose beyond just bearing the burden of his passion and creativity. He has set up his ‘canvas centre’ right in front of an old building in a busy market of the city.

“Change both positive and negative is inevitable, there will also be changes in the patterns of architecture, but the old architecture and rich cultural values are our identities which need to be preserved,” he said. “There is a need to understand and appreciate cultural values and its importance.”

Talking about the contest, Sajid told The Express Tribune that this was one of the first international watercolour contests where art was used to bring together people from across the region.

But this was not Sajid’s first award. Last year, he won the Daniel Smith Award during the Maxi painting contest in Fabriano, Italy in which 700 watercolourists from across the world had participated.

For Sajid, who used to find himself alone while pursuing his passion in the streets of the old city, the artist is now glad to see not only the quality of fine arts improve but also see better facilities available for younger artists.

“A number of art institutions have now opened in the city since there is tremendous enthusiasm for art amongst the youth,” Sajid said, noting that militancy gave the region one of the darkest episodes for art with a host of performers attacked and discouraged.

All of this, Sajid said, had gravely impacted art.

“People stopped indulging in art,” the painter lamented as a pall of gloom fell on his face hinting the flood of bad memories.

“But the good thing is that they [art activities] have resumed, people are taking an interest [in art] and now more [art] institutes are opening,”

Talking about the nature of art in the province, Sajid said that local artists were more inclined to traditional forms of art.

“There is now a need to introduce contemporary art in the province,” he said, adding that local artists need to raise the standard of their art.

“There is now a need for an art gallery where artists can display arts and sell their work to earn from it.”

Capital inducted into WHO programme