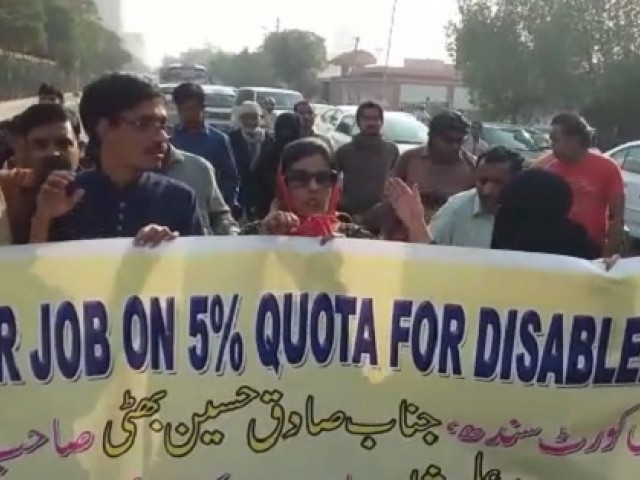 KARACHI: Dozens of physically-challenged persons held a demonstration outside the Sindh Assembly on Monday, demanding for the implementation of an increased job quota for disabled persons.

Holding placard and banners, protestors on wheelchairs and walking sticks, sat at the entrance of the Sindh Assembly building, chanting slogans.

“We are facing a host of problems,” said Zubair Soomro, a demonstrator who travelled from Khairpur Mir to attend the protest. “Five per cent job quota has not been implemented despite government’s tall claims.”

Job quota for people with disabilities increased to 5%

The protest was ignored by ministers and members of the provincial assembly. Speaking to The Express Tribune advisor to the Chief Minister of Sindh on Social Welfare, Shamim Mumtaz defended the government’s policies. “It is only the Pakistan People’s Party [PPP] government which has given rights to disabled person,” said Mumtaz. “We have passed a bill to increase jobs from two to five per cent.”

She assured that genuine issues brought forward by the protestors would be resolved.

The quota for people with disabilities in government jobs was increased from 2% to 5% by Chief Minister (CM) Murad Ali Shah in December 2016. He was speaking to a 35-member delegation of the Disabled Person Welfare Organisation at CM House.