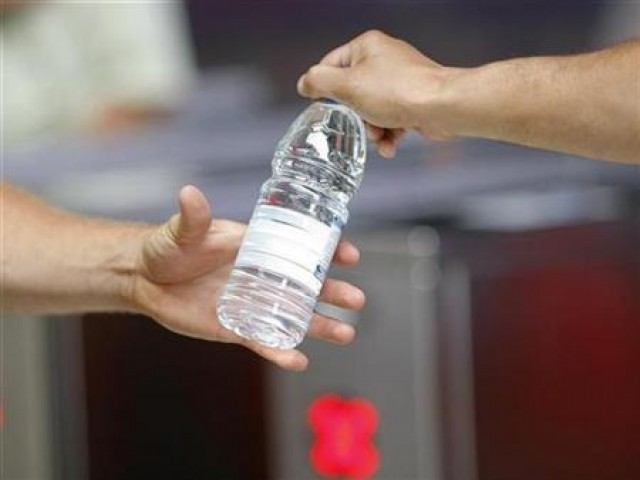 A man hands a bottle of water to another man. PHOTO: REUTERS

KARACHI: With rapid urbanisation, increasing population and growing awareness of consumers, the demand for clean drinking water has ballooned over the past few years in Karachi and other major cities.

Consumers are increasingly counting on private suppliers of filtered bottled water as government water boards fail to cope with burgeoning needs of the people.

An example in this regard is the setting up of four bottled water plants over a span of two years in less than half a kilometre area of Jehangir Road, Martin Quarters (Jamshed Town), which indicates the upsurge in demand for purified water in the country.

According to the World Health Organization, Pakistan has 80th place among 122 countries in drinking water quality. Gradually, the threat of diseases from contaminated tap water and benefits of clean drinking water, along with better disposable income of consumers, are turning them towards a healthy lifestyle. This, of course, has sparked growth of the bottled water market in the country.

Per capita bottled water consumption is estimated at five litres but it is growing due to rising awareness. Pakistan’s consumption is higher than that in Bangladesh where per capita consumption stands at three litres whereas in India it is estimated at 11 litres, according to an official of Nestlé Pakistan who gave the estimates in an email reply to The Express Tribune.

Earlier, PSQCA had registered 300 plants but over a period of time it shut 179 of them as they were not meeting the required standards, said the director general.

According to PSQCA, 69% of water samples have been found to be contaminated in 24 cities, providing room for small filtered water plants to bridge the demand-supply gap.

These small plants can be set up with an investment of just Rs500,000, which produces a hefty return in the range of 60% to 100% – a big incentive for entrepreneurs with little resources.

A company that sells filtered water plants in Karachi’s Gulshan-e-Iqbal area promises its customers handsome returns on capital injection of only Rs500,000. So far, it has sold hundreds of plants.

According to the company’s estimate, the processing of one litre of water costs just 25 paisa which includes the cost of water purification through reverse osmoses technique, minerals, electricity and labour work. This one litre can be sold to consumers in the range of Rs2 to Rs4.

A plant can process 3,000 gallons of water a day, therefore, the plant that runs for 12 hours generates revenues of Rs10,000 to Rs22,000 whereas the one that runs for 24 hours earns investors Rs20,000 to Rs42,000. The plant can last 10 years. Plant operators have set up a supply chain in their respective areas by offering home delivery services. They charge Rs70 to Rs100 for delivering the bottled water worth Rs30 to Rs50.

With the mushrooming of water plants, young population has also found job opportunities. These young men have built special carriage bikes for water delivery at homes.

However, there are instances when consumers complain about the below-par quality of water.

PSQCA has designed a policy aimed at restricting the sale of substandard water. Under the policy, all purification plants need to get a no-objection certificate from PSQCA before running their operations.

“Water plants are not allowed to be set up in residential areas and those that are already functioning are given one year to shift to industrial or commercial areas,” said the PSQCA DG. Every plant is also required to set up a laboratory in order to regularly check water quality in line with PSQCA standards.