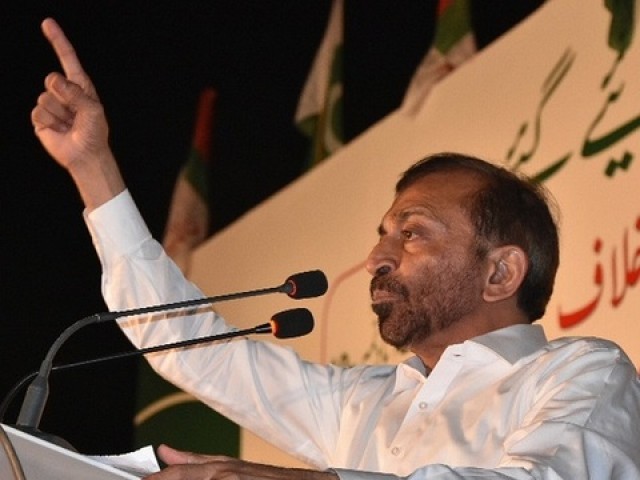 KARACHI: The Muttahida Qaumi Movement (MQM) – Pakistan rallied its forces on Sunday and held a public gathering in Liaquatabad. After suffering numerous desertions from its ranks, the party aimed to consolidate its strength and show the city that it is still a force to be reckoned with.

Taking a jab at the Pak Sarzameen Party (PSP), Leader of the Opposition in the Sindh Assembly Khawaja Izharul Hasan said for the past year they have been hearing that “wickets would fall”, referring to people jumping ship to join Mustafa Kamal’s party. Likening the MQM to a sea, he said the “wickets of a sea of people cannot fall”. In fact, he bashed the use of the term wicket in reference to people and said, “Wickets are used in cricket, not to describe people.”

“If the MQM was any other party it would have fallen into disrepair by now,” he told a crowd teeming with party workers and supporters. Unmarred by violence or clashes, the event was filled with people eager to let their political leaders soothe their worries about the party’s future. And the leaders delivered. Each high-ranking MQM-Pakistan leader who took the stage reminded the crowd of the party’s strength and dismissed its opponents.

Using an analogy of halwa, Hasan said if the party was so soft and easy to finish it would have been ended by the events of August 22. Hasan said the city of Karachi votes for the kite, the party’s electoral symbol, adding that if Karachi suffers, the whole country suffers.

“Karachi is the heart of Pakistan and we should all work to strengthen it,” he said. 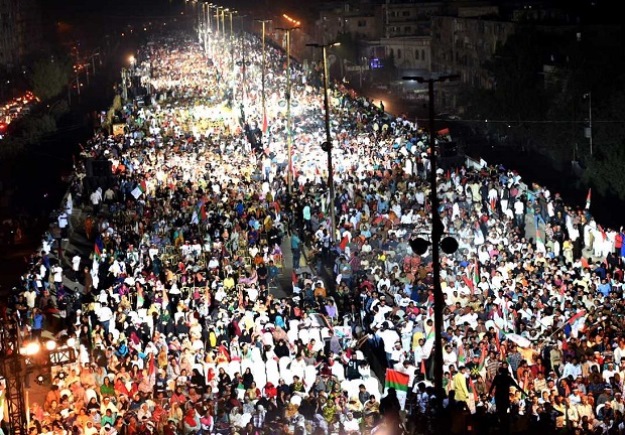 “We give you the stage,” he offered tauntingly to political opponents PSP and MQM-London. “Come show us how you knock down wickets.”

Addressing his opponents directly, Hasan said, “Let me tell you, your house does not become stronger by knocking down wickets”. He challenged them to target workers and leaders in Pakistan Muslim League – Nawaz and Pakistan Tehreek-e-Insaf. “Don’t knock down the wickets of your own house,” he urged.

“Attempts are being made to weaken our house [party],” he told participants of the rally. He advised party workers to stay true to its manifesto and remain loyal to the MQM.

Senator Nasreen Jalil expressed joy at seeing the massive attendance at the event. She affirmed her support for MQM-Pakistan Convener Dr Farooq Sattar and said the rally was a victory for the party.

MPA Faisal Subzwari also spoke at the event and said the party must rally its numbers. He said their fight was with elements looking to destabilise the party. “We are showing everyone watching at home on their televisions our participation and the fulfillment of our responsibility to the party,” he said.

The MQM leader also discussed the recently conducted census, lamenting that the province’s population had been undercounted in the national exercise.

Taunting the party’s naysayers, he said those who said MQM-Pakistan had lost support should just take a look at the massive number of supporters who had gathered for the rally.

“Today the MQM is not here to fight any political parties. It is here for the people of Karachi,” he said. He accused the Pakistan Peoples Party (PPP) of considering the city nothing more than a place to loot. “Making money and then fleeing to Dubai is the PPP’s modus operandi,” he accused.

Political vultures are circling, he warned participants of the rally, adding that they were ready to tear apart Karachi.

Turning to the ongoing struggle by the city’s mayor for funds and power, Subzwari said, “The MQM does not want funds to build a palace; we want to build underpasses and roads.” He urged the party’s rivals to look at the number of people at the rally. “We are here and we aren’t going anywhere,” he warned.

Referring to the huge crowd, leader Kamran Tessori said those who wanted to ‘clean bowl’ the MQM should realise that the party would not disappear on their whims. He dismissed rumours of a rift in the party and said it was united under Dr Sattar’s leadership.

Taking a jab at the city’s deputy mayor who recently left the party, Karachi Mayor Wasim Akhtar said the MQM would remain unaffected by such departures.

He pointed to invisible hands who wanted to shape the course of Karachi’s politics according to their desires. New parties are being artificially formed, the mayor claimed, adding that the people would reject such parties in the elections.

Akhtar also made it clear that the MQM had no plans to alter its name, flag or electoral symbol. “Our name, our flag and our symbol are our identity. Our workers have laid down their lives for these symbols and we cannot give them up,” he announced.

Dr Sattar referred to the party’s decision to part ways with its founder Altaf Hussain after his anti-state speech on August 23 last year. We ushered in a new chapter and brought the party back to its original ideology, he said. He claimed that the party did not believe in any sort of violent struggle.

Dr Sattar focused on the recent census in his speech, saying that while Karachi was comprised of 30 million people, its population was deliberately shown to be less in the census. He claimed that in other cities where Urdu-speaking people were in majority, such as Hyderabad and Sukkur, the population was recorded as less than what it actually was. Without the correct population statistics no problem faced by the country can be resolved, lamented Dr Sattar.

He said misreporting the population of Karachi would result in a smaller share of resources for the city, which is already resource-starved. When Karachi progresses, so does the country, he added. Fabricated census results would also pave the way for rigged elections, as without correct figures, no just delimitation of constituencies would be possible, he said. Dr Sattar also alleged that the non-Muslim population of Pakistan was not properly counted in the census. 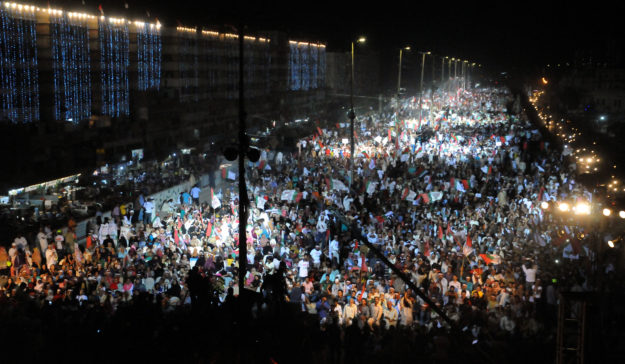 This is not only the problem of Muhajirs, but is an issue for all ethnicities living in the city, he said. The MQM-Pakistan head demanded a fresh census and requested the Supreme Court to hear the party’s census-related petition.

Addressing Sindhi-speaking people, he said the MQM would also raise its voice for their rights and welfare. “Those who were elected by your votes did nothing but paperwork for you,” he said.

He called the gathering a sea of human beings. “Today’s demonstration has proved that MQM’s strength is based on the support of the public,” he said. “It has also been proven that those who deserted MQM have been rejected by the people.”