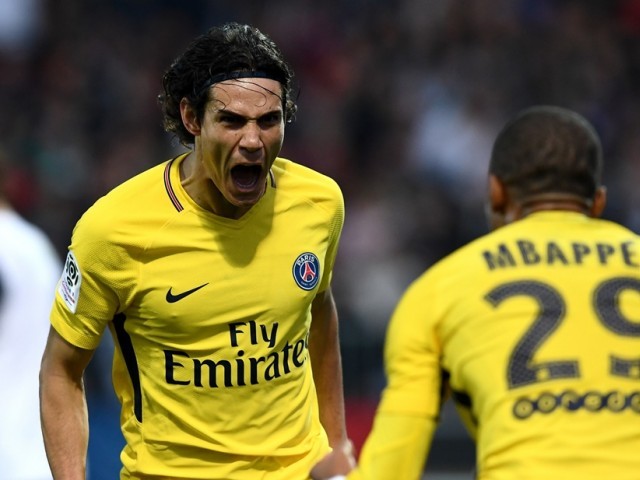 PARIS: The injured Neymar was left at home as Edinson Cavani reached a century of goals in Ligue 1 with a brace in Paris Saint-Germain’s 5-0 romp away to Angers on Saturday.

The world’s most expensive player sat out the game at the Stade Raymond Kopa with a minor thigh problem picked up in the midweek Champions League win over Anderlecht but he was not missed as PSG maintained a four-point lead over Monaco at the summit.

Kylian Mbappe and Julian Draxler both scored early goals and Cavani netted his 100th in France’s top flight on the half-hour mark.

The Uruguayan scored again on the hour before Mbappe grabbed his second of the day late on to take him to six goals in 12 appearances for the club.

“For an attacker it is always important to score goals, all the more so when it means you can bring something to your team,” said Cavani. “I am happy, but I don’t think too much about records and statistics. I think about giving my best for the my team, that’s all.”

A second successive five-goal victory for PSG means they remain unbeaten in all competitions this season, while Angers are still without a home win.

As well as Neymar, PSG were without Marquinhos and Angel Di Maria, whose partners have both given birth in recent days.

Their opener arrived inside five minutes as Mbappe turned in a Dani Alves cross from the right, and it was 2-0 soon after when Alves set up Draxler for a delightful finish.

The third goal that allowed Cavani to reach his century came at the end of a brilliant move, with Mbappe showcasing his lightning pace as he set up the Uruguayan to blast home.

Cavani, signed from Napoli in 2013, reached the landmark on his 145th Ligue 1 appearance and joins a select club in having scored 100 times in two of Europe’s big five leagues having also achieved the feat in Serie A.

The only others to have done so are Gonzalo Higuain (Spain and Italy) and Zlatan Ibrahimovic (France and Italy).

He is also well on course to catch Ibrahimovic as the club’s all-time top scorer in the league, with the Swede hitting 113 in his four seasons.

Cavani hit his 101st — his 13th of this season — in trademark fashion, starting his run in the right-back position and bursting forward to collect a Draxler pass before toe-poking home.

Mbappe completed the rout as he rounded goalkeeper Mathieu Michel and scored from a tight angle after being released by Lucas Moura.

Reigning champions Monaco responded to PSG’s victory by going one better as they dismantled Guingamp, winning 6-0 at the Stade Louis II, the second time they have scored six in the league this season.

The principality club were without the likes of Djibril Sidibe, Thomas Lemar and Radamel Falcao but their second string ran riot.

Guido Carrillo marked his first start this season with a brace and Adama Traore also scored twice, while Keita Balde got his third goal in three Ligue 1 games and Fabinho converted a penalty.

Claudio Ranieri’s Nantes beat Toulouse 2-1 as they moved back up to third place above Lyon, who go to derby rivals Saint-Etienne on Sunday.

Emiliano Sala set up Adrien Thomasson for the opener and then got the winner after Alexis Blin had equalised for the visitors. Nantes have scored just 11 goals all season.

Elsewhere, Marseille host Caen on Sunday in what could be a tense atmosphere in their first outing since Patrice Evra was suspended by the club for aiming a karate kick at the head of one of his team’s own supporters.

Evra was red-carded after the incident, which occurred in the pre-match warm-up before Thursday’s Europa League clash with Vitoria Guimaraes in Portugal.

I was better off not bowling to Kohli, jokes Akhtar