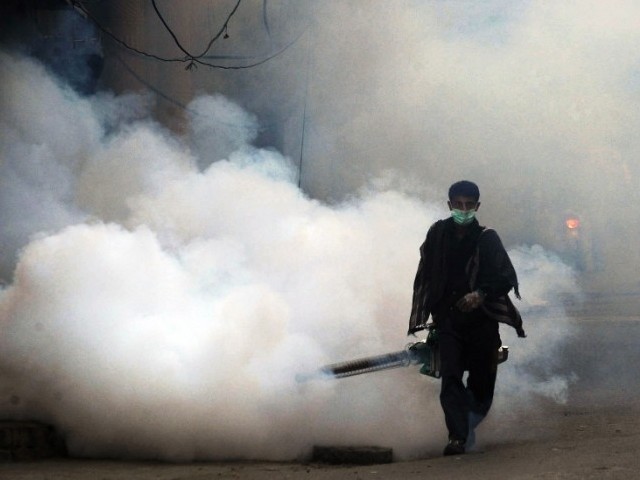 Experts say a massive campaign was being carried out in high risk areas. PHOTO: FILE

PESHAWAR: As the dengue virus has already claimed some 69 lives, experts engaged with the anti-dengue programme across Khyber-Pakhtunkhwa (K-P) doubt end of viral infection.

Experts fear it could take three to five years to completely root the viral infection out of the province, however they have prepared to advantage of the receding temperatures, separating eggs from water.

Experts stated that a massive campaign was being carried out in high risk areas adding the mosquito has been controlled but what they feared was if eggs were not separated from water, there could be a huge outbreak by the end of February or early March next year.

He also stated besides Peshawar, every single high-risk area [where cases were reported from] has been identified however stressed upon community to change their habits since the government was doing its job outside homes but until and unless there were breeding sites within houses, the issue existed.

On the other hand, World Health Organization (WHO) stated provincial health department reported around 22,000 cases of dengue fever with around 69 deaths since July 19, 2017. Peshawar alone reported the highest number, 78,844 suspected and 16, 991 confirmed cases.

“The total number of such cases is around 22,000 but it also includes people who tested for the fever multiple times so the number is likely to be below 22,000 however the K-P government has done an enormous job,” WHO Country Head Dr Mohammad Assai Ardakani told The Express Tribune on phone.

Ardakani stated that he was sure the situation will soon be completely under control however added: “This should not be the responsiblity of the health department only, but a multi-sectoral approach including the water and sanitation department, local government and other stakeholders,” Ardakani informed adding the government has visited almost every household and sensitised the general public by involving community and teachers besides others.

Toll from dengue virus outbreak rises to 50 in K-P

The health directorate is coordinating with Dengue Response Unit in collaboration with WHO which includes providing technical guidance and support for health workers for surveillance, laboratory diagnosis, case management and social mobilisation.

Awareness sessions have been held for religious leaders, school teachers and head masters to advise the community on dengue causes and prevention.