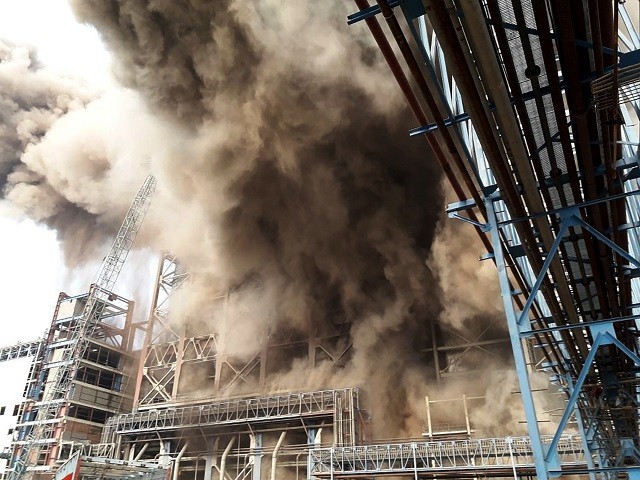 Smoke billows from a coal-fired power plant after a boiler unit exploded in the town of Unchahar in the northern Indian state of Uttar Pradesh on November 1, 2017. PHOTO: AFP

LUCKNOW: An explosion at an Indian power plant Wednesday killed at least 16 workers and seriously burned dozens of others, police said.

Images showed thick grey plumes of smoke rising into the sky before ambulances rushed to the scene.

The state’s principal secretary, Arvind Kumar, said up to 100 were injured in the explosion, according to the Press Trust of India.

Anand Kumar, a director-general of police in the state capital Lucknow, said preliminary findings suggested that ash had collected in the furnace below the boiler, causing the explosion.

“Ash had accumulated for some reason which should not have happened. And due to that, pressure built up inside and led to the blast,” he said in a video statement uploaded on YouTube.

The state operator said there was a “sudden abnormal sound” at one of the units in the plant.

“An enquiry has been set up by NTPC management to investigate the reasons for the accident,” it said in a statement late Wednesday.

“All possible measures are being taken to provide immediate relief to the families of affected people in close coordination with the district administration.”

Uttar Pradesh chief minister Yogi Adityanath offered his condolences to the families of the dead and offered each compensation of 200,000 rupees ($3,096).

Workplace accidents are common in India, where poor safety standards and lax enforcement of regulations have led to horrific deaths.

Blast kills 13 at wedding in India

India’s power distribution system is prone to accidents, mostly because of poor maintainance and underfunding in rural areas.

An electricity transformer exploded outside a wedding in the western state of Rajasthan Tuesday evening, killing at least 13 people including a pregnant woman.

Dozens of guests had assembled for the ceremony in Jaipur when the transformer blew up, spewing hot oil and metal shards.

Nearly 10,000 people died of electrocution in India in 2015, according to the most recent data available from the national crimes records bureau.