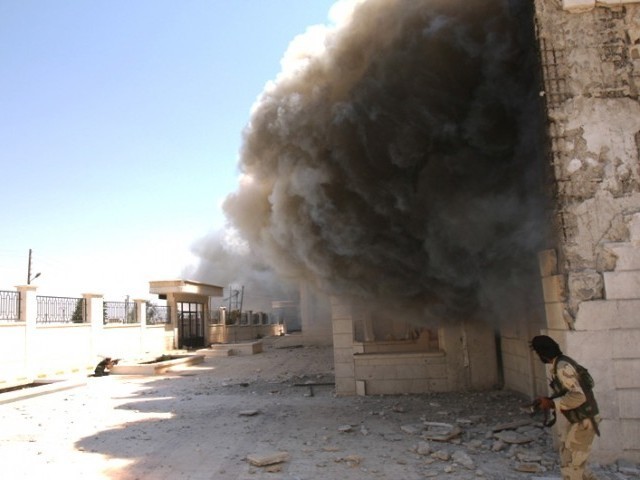 BEIRUT: Heavy clashes between Syria’s army and the Islamic State group in Deir Ezzor city have killed at least 73 fighters in the last 24 hours, a monitor said Sunday.

Syria’s army controls most of Deir Ezzor city, capital of Deir Ezzor province in the country’s east, and made further advances after responding to an IS attack that began Saturday, the Britain-based Syrian Observatory for Human Rights monitor said.

The monitor said the fierce fighting Saturday killed at least 50 IS fighters, as well as 23 Syrian soldiers and pro-regime militiamen.

“IS is now encircled in an area between the city and the (Euphrates) river,” Abdel Rahman said.

IS once held large sections of Deir Ezzor city, and for nearly three years laid siege to other parts of it that remained under government control.

Afghan Taliban in bid for ceasefire with IS

In early September, advancing government forces broke the siege, and they have been working since to expel the militants from the rest of the city.

Abdel Rahman said the fighting that began Saturday was the fiercest in the city since government troops broke the siege, adding that clashes were continuing Sunday, with regime ally Russia carrying out heavy air strikes in support of the army and allied fighters.

Deir Ezzor, an oil-rich province that borders Iraq, was once a stronghold of IS, but the militant group faces twin assaults there, from the regime and the US-backed Kurdish-Arab Syrian Democratic Forces.

The militants have already been expelled from neighbouring Raqa province, and are now confined to just a few pockets of territory in Deir Ezzor.

More than 330,000 people have been killed in Syria since the conflict began in March 2011 with anti-government protests.

Taiwan president lands in US despite Chinese objections