Till Thursd­ay, FM had no plans to attend Carec confer­ence due to its insign­ifican­ce
By Shahbaz Rana
Published: October 29, 2017
Tweet Email 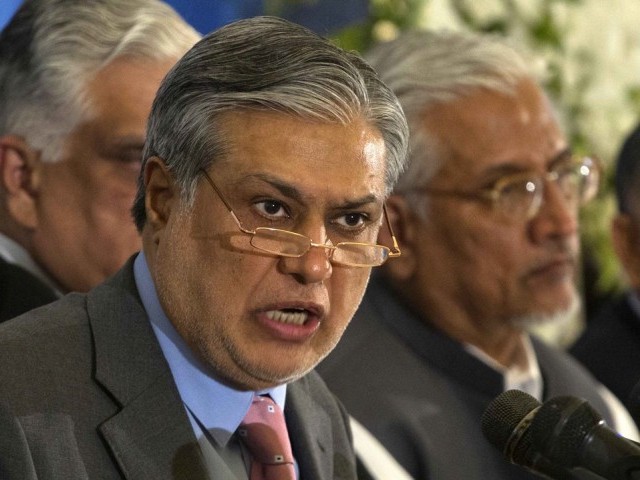 ISLAMABAD: A last-minute move by Finance Minister Ishaq Dar to charter the special aircraft of prime minister for his one-day official trip to Tajikistan has not only cost the kitty dearly, but his decision to extend his trip for a couple of days has also sparked speculations and rumours of all types.

Dar on Friday went to Dushanbe to attend the Central Asia Regional Economic Conference (Carec) – sponsored by the Asian Development Bank (ADB) – for which the Tajikistan minister of economic development had extended him an invitation through a letter written on September 14.

Dar to be indicted on Wednesday

The minister had informed Dar that the expenses would be borne by the ADB. But Dar’s decision to use the special aircraft has shifted the financial burden from the shoulders of the host to the guest.

It took Dar 40 days to decide if he would personally attend the Carec’s 16th Ministerial Meeting, and he made up his mind just a day before its start. To his bad luck, there was no flight available for Tajikistan.

Dar then decided to use the AirForce-1 – the aircraft that the Pakistan Air Force (PAF) manages for the use of PM, said an official of the Finance Ministry involved in the decision making.

Interestingly, Dar did not have a plan to attend the meeting till Thursday and the government had sent two junior-level officers of the Economic Affairs Division to represent Pakistan.

Due to insignificance of the Carec conference, even the Economic Affairs Division secretary had decided not to attend the meeting. Earlier, Dar had skipped annual official meetings of the International Monetary Fund and the World Bank.

PM’s spokesman Dr Musadiq Malik confirmed that the concerned division would bear the expenses for using the special aircraft. He said since the plane was maintained by the PAF, the Ministry of Finance and Economic Affairs would reimburse the expenditures to PAF.

Sources said the PM aircraft’s returned to Pakistan on Friday without Dar on board. The eleventh-hour decision of the finance minister surprised many, particularly when he flew on the special aircraft. Dar has now extended his stay abroad for a couple of days.

A Finance Ministry official said Dar’s original plan was to return the same day. However, after reaching Tajikistan, Dar decided to stay for a couple of days in the United Arab Emirates, he added.

Dar’s Special Assistant Qamar Abbasi did not respond when asked to comment when Dar would be coming back to Pakistan. There is a possibility that Dar may come back in the wee hours of Monday when an accountability court would resume hearing of a case about Dar allegedly owning assets beyond his known sources of incomes.

Former prime minister Nawaz Sharif was supposed to come back to Pakistan early this week but he also made a stopover in Saudi Arabia. Due to his absence from the accountability court, the court has issued bailable arrest warrant for him.

The sources said Dar wanted to meet Sharif in order to know about any plans on how to get out of the prevailing political problems. Sharif’s plan to stay in Saudi Arabia instead of coming to Pakistan had worried Dar, they added.

Dar’s unscheduled stay abroad fuelled speculations about his future role in the current political dispensation. During his last press conference, he had ducked a question on his future course of action in the backdrop of his indictment by the court. His only response was that people would soon come to know about it.

Dar is unable to fully focus on his core job of running the country’s economy at a time when the economic conditions are precarious. International financial institutions and experts have warned about serious challenges on the external front and are seeking immediate policy response. However, Dar’s time and attentions are divided between his court cases and official duties.